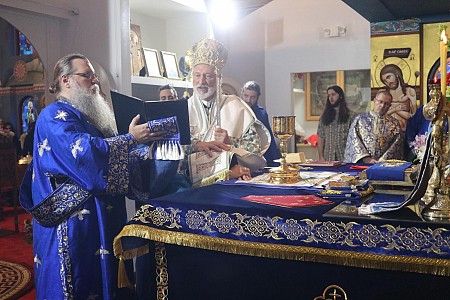 On Monday, September 5, 2022, clergy, monastics and faithful gathered around His Grace Bishop Irinej of Eastern America at the parish church of the Holy and Glorious Great-martyr Demetrius in Akron, OH in a joyful celebration of their Hierarch’s Names Day, the Holy Hieromartyr Irenaeus of Lyon (130-202 AD).  Services began with more than 20 local clergy from throughout the Cleveland and Pittsburgh Deaneries of the Eastern American Diocese of the Serbian Orthodox Church, Clergy from the local Antiochian Orthodox Churches, and an honored guest, Abbot Gavrilo of Djurdjevi Stupovi Monastery from Kosovo and Metohija, greeting His Grace outside of the church.  On behalf of the clergy, Bishop Irinej was greeted by the host priest and Dean of the Cleveland Deanery, Reverend Economos Dragan Goronjic. Following the same, they entered in solemn procession to the church, which was beautifully adorned with flowers and new frescoes.  With All Glory to God, the faithful gloriously sang the responses to the Festal Liturgy that ensued. Blue vestments were worn by the concelebrating clergy in honor and celebration of the Apodosis of the Feast of the Dormition of the Theotokos.

During the inspired homily, His Grace spoke to those gathered on the life and works of St. Irenaeus, noting that this great early Christian Teacher of the Church was a prolific writer and defender of the faith. His writings bear the hallmarks of an apostolic writer, having been taught by St. Polycarp of Smyrna, who learned from St. John the Evangelist. Through Irenaeus, the Three Pillars of Orthodoxy were established as Scriptures, Holy Tradition and the Teachings of the successors of the Apostles, i.e., the Holy Fathers.

During the Divine Liturgy, His Grace Bishop Irinej also ordained Subdeacon Mihajlo Pancoe to the Holy Diaconate.  In paternal response to the remarks offered by his spiritual son, Subdeacon Mihajlo, in anticipation of his Ordination, the Bishop in addressing him, provided the faithful with a moving message regarding the profound and life-changing meaning of Ordination and the diaconal service to the Lord. Inviting the faithful to acclaim the vesting of the new deacon, thus affirming the ordination and participating in the same by exclaiming with all their might, AXIOS!  DOSTOJAN!  WORTHY!, which reverberated throughout the church.

Following Divine Liturgy and the cutting of the Festal Bread - Slavski Kolac in honor of the Bishop’s Patron Saint at the hands of Abbot Gavrilo, a Festal Banquet was lovingly prepared in a harmonious synergy and love by the Circles of Serbian Sisters of both Cleveland and Akron, joined by the sisters of New Marcha Monastery.  His Grace addressed the faithful on the importance of the holy relics of St. Irenaeus in the city of Lyon in southern France and expressed gratitude in that this memorable celebration of His Name's Day and the ordination day of the new Deacon Mihajlo would have the blessing of Kosovo borne in the person of the visiting Abbott Gavrilo. 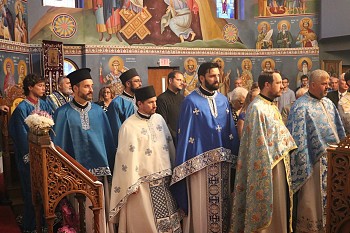