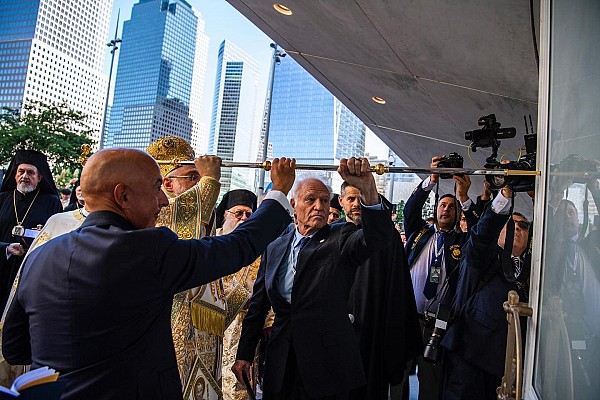 Early morning, July 4, 2022, faithful, clergy, and supporters from across the United States gathered at the World Trade Center for the consecration of the St. Nicholas Greek Orthodox Church and National Shrine in New York City.

Nearly 11 years after the harrowing attacks on the Twin Towers, the re-building of the Shrine, the only house of worship destroyed on 9/11, is “an act of faith—faith in God and in the American vision of religious liberty,” said the Friends of St. Nicholas.

The ceremony involved the sealing of the Holy Relics of Saint Nicholas within the altar table and took place within the context of the Divine Liturgy, officiated by Their Eminences Archbishop Elpidophoros of America, Metropolitan Nicholas of Detroit and Metropolitan Savas of Pittsburgh, who were joined by the Rev. Protopresbyters of the Ecumenical Throne Alexander Karloutsos and Andreas Vithoulkas.

According to tradition, the presiding bishop signs the katasarkion, first covering of the altar table once it has been consecrated, but in a moving demonstration of unity, Archbishop Elpidophoros also invited each Metropolitan of the Holy Synod, the two living former Archbishops of America Spyridon and Demetrios, Representatives of the Ecumenical Patriarchate, Their Eminences Metropolitan Emmanuel of Chalcedon and Metropolitan Prodromos of Rethymnon, Their Graces Bishop Irinej of the Serbian Orthodox Church and Bishop Saba of the Georgian Orthodox Church, as well as the Rev. Protopresbyter of the Ecumenical Throne Alexander Karloutsos, to sign the katasarkion on the consecrated altar.

In his homily, Archbishop Elpidophoros said, “…although it is a Greek Orthodox House of Worship, we welcome all. We invite all. We accept all. And we practice love of others; not prejudice; not rejection; and certainly not hatred. This Shrine will be a place for everyone who comes to the Sacred Ground at the World Trade Center to imagine and envision a world where mercy is inevitable, reconciliation is desirable, and forgiveness is possible.”

Remarks were also delivered by Friends of St. Nicholas Chairman Dennis Mehiel and Vice-Chairman Michael Psaros, who were recognized by Archbishop Elpidophoros as Centennial Honorees.

Archbishop Elpidophoros also recognized Father Alexander Karloutsos as a Centennial Honoree, presenting him with the gold cross of Hagia Sophia: “When all lost faith, you kept it. When all gave up hope, you hoped all the more. And the love you hold for this Church will be forever recognized in this Shrine, as we shall install in the Narthex of this Church the icon of your patron Saint, the Holy Alexander, Archbishop of Constantinople, as a perpetual memorial to you, your sacrifice, your faith and your love.”

In addition to the leadership of the Friends of Saint Nicholas, ecumenical leaders, and officials of the Port Authority of New York & New Jersey, were also present, among others.

GREAT VESPERS AT ST. NICHOLAS BY METROPOLITAN OF CHALCEDON 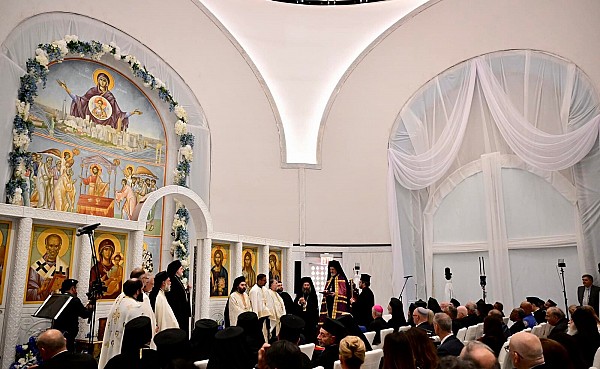 On July 3, at the St. Nicholas Greek Orthodox Church and National Shrine Metropolitan Emmanuel of Chalcedon presided over Great Vespers.

In an affirmation of unity across the Greek Orthodox Archdiocese of America, the Chancellor from each Metropolis served.

His Eminence Archbishop Elpidophoros of America honored the exceptional service of George Gigicos and Andy Veniopoulos, who have “used their remarkable talents and skills to bring the Shrine to vital moments of its public reveal: last year, on the eve of September 11th, for the Lighting of the Shrine; on the Thirtieth Anniversary of His All-Holiness’ Patriarchal tenure, for the Opening of the Doors by Ecumenical Patriarch Bartholomew; and tonight, for this Vespers and the Consecration tomorrow.”

Archbishop Elpidophoros also expressed his gratitude to His Beatitude Patriarch Porfirije of Serbia, who commissioned and gifted a full set of ornate altar coverings for Saint Nicholas. 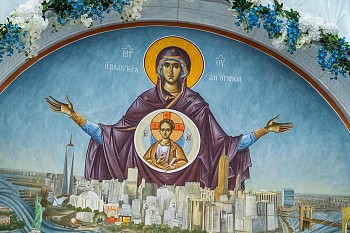