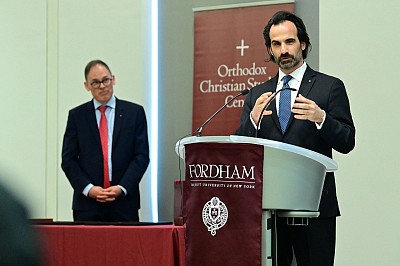 On Tuesday, May 31, 2022, the Orthodox Christian Studies Center at Fordham University in New York City held its 10th anniversary celebration in tandem with the Patterson Triennial Conference, which was held in the presence of many distinguished international academics and guests, from May 31 – June 3, 2022. It was truly a night to remember.

During the event, the Center celebrated first 10 years, paying tribute to its founders and benefactors, acknowledging its exemplary students, and honoring its cherished partnerships with Marianna and Solon Patterson and Father Joseph McShane, distinguished retiring President of Fordham University. In addition, the Center presented Father McShane with a beautifully designed icon of St. Joseph, the work of the hands of iconographer, Aris Kovaci. The icon was commissioned by the Patterson Family Foundation.

The Orthodox Christian Studies Center dedicated the sixth Patterson Triennial Conference to initiate the 1,700-year anniversary (325-2025) of the Council of Nicaea. Twenty-one scholars from the United States and abroad explored the contemporary relevance of the Council of Nicaea for Christian thought and practice. Among the many notable guests present for the Conference on Nicaea, Conciliarity, and the Future of Christianity were His Grace Bishop Dr. Maxim of the Western American Diocese of the Serbian Orthodox Church, the Very Rev. Professor Dr. John Behr of Aberdeen University, Rev. Archdeacon Dr. John Chryssavgis of the Ecumenical Patriarchate, Rev. Dr. Bogdan Bucur of St. Vladimir’s Orthodox Theological Seminary, and others.

The Center launched its 10th anniversary campaign and announced that the $5 million campaign goal already has $2.8 million committed. A commemorative 10th Year Anniversary brochure was prepared for distribution. A newly secured space for the Center at Fordham's Loyola Hall was presented, construction of which is expected to begin in 2023/24. Architect John Lignos, Principal at SNS Architects & Engineers, PC and associates designed a stunning rendering of the new space. 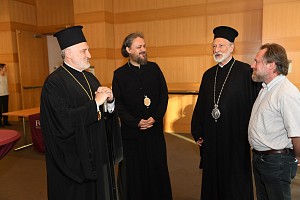