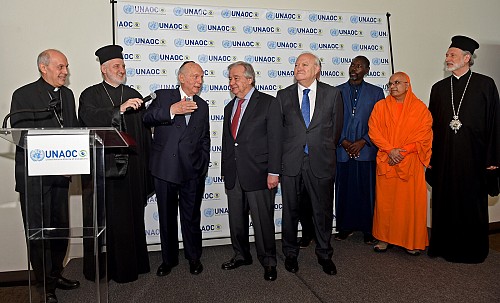 March 12, 2020 – His Grace Bishop Irinej of Eastern America accepted the invitation of and His Excellency Ambassador Miguel Ángel Moratinos High Representative for the United Nations Alliance of Civilizations to a luncheon on the occasion of the 90th Birthday of Rabbi Arthur Scheier, an Eminent Member of the High-level Group of the United National Alliance of Civilizations (UNAOC), Founder and President of the Appeal of Conscience Foundation, and Senior Rabbi of Park East Synagogue in New York City.

The celebration honoring his six decades of leadership on behalf of religious freedom, human rights and peaceful co-existence, was held in the Delegates’ Dining Room of the United Nations Headquarters in New York, NY. Participating in the program were His Excellency Ambassador Miguel Ángel Moratinos, His Excellency António Guterres, Secretary General of the United Nations, His Eminence Timothy Cardinal Dolan, Roman Catholic Archbishop of New York, The Honorable Dr. Henry A. Kissinger, Secretary of State of the United States of America (1973–1977) as Keynote Speaker, and His Eminence Archbishop Elpidophoros of the Greek Orthodox Archdiocese in America and Exarch of the Atlantic and Pacific Oceans.

Many distinguished world leaders, both religious and secular, presented their congratulatory remarks via video recordings, and in writing. It was the distinct honor of Bishop Irinej to present the personal letter of congratulations, from His Holiness Serbian Patriarch Irinej to Rabbi Arthur Schneier, a proven friend of our people and our Church.