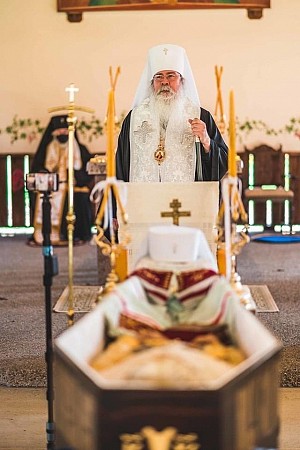 Concelebrating at the Memorial Liturgy were: Bishop Irinej of Eastern America, representing the Episcopal Council of the Serbian Orthodox Church in North, Central and South America, together with the following Hierarchs of the Orthodox Church in America: Archbishops Benjamin of San Francisco and the West, Melchizedek of Pittsburgh and Western Pennsylvania, and Michael of New York, New York and New Jersey.

Prayerfully present at the Liturgy and participating in the burial service were Metropolitan Savas of Pittsburgh, representing the Greek Orthodox Archdiocese of America, and Archbishop Nathaniel of Detroit and the Romanian Episcopate.

Following the delivered eulogies, a number of letters of condolences that were received from various Patriarchates and others were read. Bishop Irinej read the message of His Grace Bishop Longin of New Gracanica and Midwestern America, President of the Episcopal Council of the Serbian Orthodox Church in North, Central and South America.

Antiphonally rendering responses to the services were the monastic sisterhood choir of the Holy Transfiguration Monastery, and a combine choir of local singers.

Mother Christophora, Abbess of the Monastery, together with her sisters prepared and served a repast meal for all present in the dining hall and spacious monastery pavilion.

May the memory of Metropolitan Theodosius be eternal! 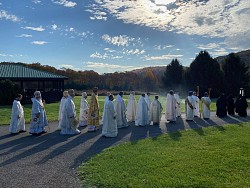