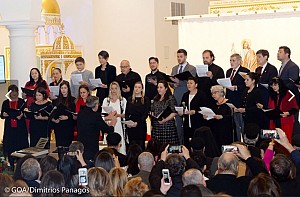 Paramus, NJ – In the midst of this Christmas season, on December 8, 2019, professional choirs of the families of Eastern and Oriental Orthodox Churches came together in concert to bear witness to their respective spiritual traditions, interpreting a selection of ancient and beautiful hymns portraying the mystery of Christ’s incarnation and the Lord’s Nativity.

His Eminence, Archbishop Elpidophoros, in his opening remarks, thanked wholeheartedly His Eminence, Archbishop Dionysius of the Syriac Orthodox Church for hosting the event at the Mor Aphrem Center, in Paramus, NJ. Noting the various ways Christians can work together in their walk towards unity, he said, “The harmony of music serves the ecumenical conversation between our Churches.

Our quest for unity and communion requires us to explore new areas where Christians can come together, work together, sing together and bear witness together to the fulness of Christ’s teaching, sacrifice and resurrection, for the life of the world.”

The proceeds of the concert will go to aid the plight of Christians in Syria.