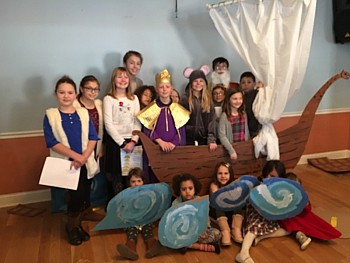 On December 23rd  the church-school children of St. Nicholas Serbian Otrhodox Church of Philadelphia celebrated thier annual Sveti Nikola program and Detinici.  This year’s program was themed; “St. Nicholas, the Patron Saint of those who travel”. The play was adapted from the children’s book,  “The adventures of St. Nicholas  and his friend  Cicero”. The was translated into Serbian by our talented Church school teacher, Zvezdana Stojmirovic. Zvezdana’s artistic talents created the props for the play, that our children had fun in preparing. After serveral weeks of stage prep and practicing, the “cast” were ready for their debut.  The day began with Divine Liturgy at which children and teachers partook of Holy  Communion. After Divine Liturgy, the children found themselves in a bit of a bind when they were tied up for detinice, and had no gift to give in order to be untied. Their offering to their parents, and all others present, was their play. Kosta Bakic was superb in the lead  role of Sveti Nikoka. Justina Sikarica and Sofi Cvijanovic served as narrators. Sima Sikarica was Emperor Constantine, and Tatijana Bogoslavesky played a very animated role as the master of the sinking ship, that St. Nicholas saved. The children concluded with “Okt tko tko”, and the Troparion of St. Nicholas. Lunch was generously provided by Father Milorad and Popadija Milena in memory of Popadija’s late parents:  Ilija  and Milica Zelen, whose Krsna Slava was St. Nicholas.  A wonderful and fun-filled day was enjoyed by all. 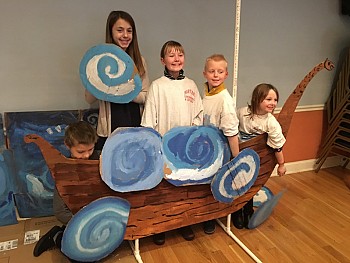