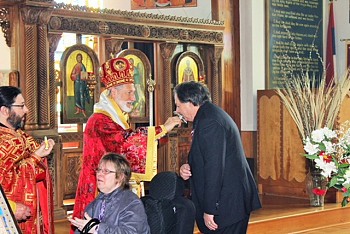 Reverend Sasa Nedic is the parish priest of St. George Church. During the Hierarchical Divine Liturgy, His Grace prayed for the founders and benefactors of
the parish as well as the living and departed clergy and parishioners.

At the conclusion of the Divine Liturgy, His Grace presented Father Sasa Nedic with the Holy Gospel in recognition of Father Nedic’s assignment as the parish priest.

His Grace called attention to Father Sasa’s previous priestly ministry in South Bend, Indiana and Elizabeth, New Jersey. His Grace described the action of the Holy Spirit at the time of a priest’s ordination. Even though Fr. Sasa is young in years, as all ordained clergy he gains 2,000 years of the Church’s wisdom at ordination.

Sonia Janson directed the inspired singing of the St. George Church. Parish Executive Board members, Choir and members of the Circle of Serbian Sisters and
the Church school were prayed for during the Divine Liturgy.

The Anniversary celebration continued with a dinner at Dolfi’s Restaurant in nearby Masontown. Father Rajko Kosic, Father Dejan Barac and Father George
Veselinovich from the Pittsburgh Deanery attended the dinner.

Parishes from Pennsylvania communities of Aliquippa, Midland, Monroeville, Pittsburgh and Youngwood were represented at the Anniversary. Holy Trinity Mission in Fairmont, West Virginia was also represented.

Speakers at the dinner included His Grace Bishop Irinej, Father Sasa and parish Executive Board President Stan Brozik. Mr. Brozik welcomed and thanked
His Grace and all in attendance.

Father Sasa expressed appreciation to His Grace Bishop Irinej and to all attendees. Father Sasa read from the writings of St. Nicholai (Velimirovich), Serbia in Light and Darkness, movingly describing the soul of the Serbian People at the time of World War I.

At the dinner His Grace encouraged the continued growth of the parish. He called for a large celebration in 2019 for the Sixty-Fifth Anniversary. Pittsburgh Deanery parishes would participate in the celebration to be held on a Saturday.

His Grace cited the leadership of Executive Board President Brozik. He thanked Sonia Janson and the St. George Choir. His Grace praised Father Rodney’s work in the parish prior to his retirement in 2017. He noted that without his pastoral guidance over his 17 years of service to the parish, perhaps the parish may not even have existed today. 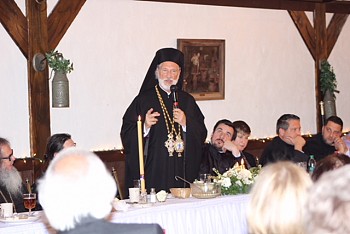