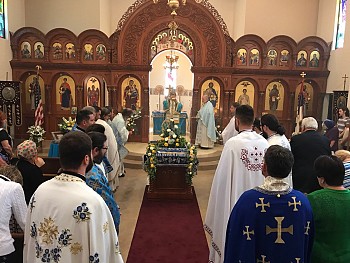 On the feast of Dormition of the Most Holy Mother of God and Ever Virgin Mary, the clergy of the Cleveland and Pittsburgh Deaneries, members of the Eastern Diocesan Federation of the Circles of Serbian Sisters (CSS) and faithful came together with His Grace, our Father and Bishop Irinej to celebrate the Holy Hierarchical Liturgy and the Patronal Feast – Slavaof the Eastern Diocesan Federation CSS, and the local parish CSS at Holy Trinity Serbian Orthodox Church on Raccoon Rd in Austintown, Ohio.

After His Grace Bishop Irinej vested, the Great Doxology was chanted, and the Shroud – plashtanitsaof the Mother of God was placed in the center of the church. Nineteen priests and one deacon concelebrated at the Hierarchical Liturgy with His Grace, they included V. Rev. Protopresbyter-Stavrophor Rade Merick, Episcopal Dean of the Pittsburgh Deanery, V. Rev. Presbyter Dragan Goronjic, Episcopal Dean of the Cleveland Deanery, and V. Rev. Protodeacon Milos Zdralic, Diocesan Secretary. The Eastern Diocesan FCSS hosts – kumewere Milomirka Dejanovic and Borka Adamovic. Subdeacon Milan Damljanovic, together with his son Maksim and other members of New Marcha Monastery singers, sang the responses for the Liturgy. Approximately 120 people were in attendance for the feast.

During the Liturgy Bishop Irinej gave an inspiring homily about the Holy Gospel Reading and the Dormition the Most Holy Mother of God. One of the most memorable points of this sermon was regarding the cincture (belt) of the Mother of God and how it was given to the Holy Apostle Thomas.  The cincture is kept at the Vatopedi Monastery on the Holy Mountain of Athos.  The Bishop recounted how cloth belts are blessed on the cincture and given to women that are having difficulty conceiving a child to wear.  He stated that from his own personal experience with these cloth belts that he gave to a number of women; six of the woman that he gave a belt to, and was worn by her, conceived a child.

Just prior to the end of the Liturgy His Grace cut the festal bread – slavski kolachfor the celebration of the Rite of a Patronal Feast. A portion of the blessed bread was passed, according to our Serbian Tradition, from this year’s kumeto the sisters of the Johnstown, PA parish of St. Nicholas, who volunteered to be next year’s kume, as well as to the local CSS in Youngstown.

Following the dismissal His Grace gave an explanation of the shroud of the Mother of God and its origins in the Patriarchate of Jerusalem. The plashtanitsawas a donation of the Very Rev. Protosingelos Sava (Medakovich) to the Federation CSS that will be entrusted to parish that volunteers accept the responsibility to be the hosts for the following year’s celebration of the Patronal Feast of the Federation CSS of the Eastern Diocese. The shroudwas entrusted to V. Rev. Presbyter Milan Dragovic of St. Nicholas Johnstown, PA for safe keeping and as a blessing until the next celebration.

His Grace Bishop Irinej at this time announced that V. Rev. Presbyter George Veselinovic of St. Nicholas – Monroeville, PA, would be appointed as the new Spiritual Advisor to the Eastern Diocesan Federation of the Circles of Serbian Sisters. His Grace also offered his heartfelt gratitude to the Very Rev. Protopresbyter-Stavrophor Dragoljub Malich for his many years of dedicated service as the immediate past Spiritual Advisor to the Federation.

During the veneration of the cross, at the conclusion of the Liturgy, each of sister received blessed flowers. The flowers that adorned the church and were given to the sisters were donated by the floral business of Jamie and Marica Furguson, parishioners of Holy Trinity Serbian Orthodox Church on Raccoon Rd.

A festal meal was prepared by Mira Popovic, President, and the sisterhood of parish Circle of Serbian Sisters. Millie Radovick, President of Eastern Diocesan Federation, spoke after the meal about the work of the Federation especially, about the work and sacrifices made by the women that serve at the St. Sava Children’s Camp in Shadeland, PA. The new Spiritual Advisor, Fr George Veselinovic offered his remarks which included his gratitude in being able to work closely with the Federation for the good of our Church and our children. George Topich gave a presentation on the work of Lifeline, Her Royal Highness Crown Princess Katerina’s humanitarian charity, and its work. At the conclusion of the meal, His Grace offered his own remarks and reflections on the work of the Sisters in the Camp; the history of the Circles and a new monument of their founder, Nadezda Petrovic, that was erected and recently blessed in the Serbian Cultural Gardens of Rockefeller Park in Cleveland, OH; as well as expounding of the philanthropic work of Crown Princess Katarina, following the example of the late, Queen Mother Maria.

The day was filled with the joy of the worship of God, the blessings our Father and Bishop Irinej, and festal celebration. 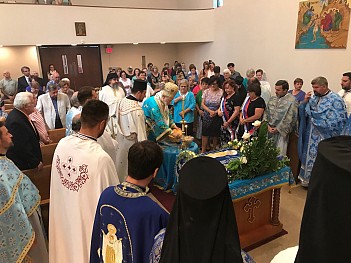