Third week of camp in Shadeland 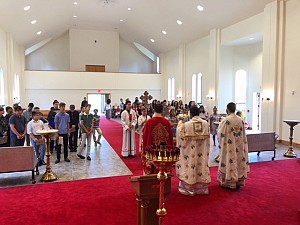 As we crossed the halfway point of the camp season, the staff and counselors at Shadeland geared up for another fun and eventful week. Sunday afternoon marked the arrival of yet another outstanding group of campers and parents, and the campers reunited and got to know each other better at the opening night bonfire.

The third week of Shadeland was led by Father Dragoslav Kosic, Father Bosko Stojanovic, and Father Vedran Grabic. They spent the week teaching the campers the importance and significance of prayer in the Orthodox faith, while the counselors also taught them kolo dancing, Serbian music, and how to make Slava Kolac.

Like previous weeks, the counselors held a carnival on Monday night, where campers were able to race their way through a bounce house or dunk their favorite counselor in the dunk tank. Tuesday night, the campers filed into two buses and we went bowling at Westway Lanes, a tradition that the campers look forward to every year. Unfortunately, inclement weather forced us to cancel our Wednesday night luau, but the campers all gathered into the girls’ barracks for a movie night. They changed into their pajamas, popped some popcorn, and cuddled up on the couches in front of the television.

Once again, on Thursday, the camp packed up and headed to Waldameer Park in Erie, where the campers spent the day riding water slides, roller coasters, and many other rides with their friends. A theme of the third week of camp seemed to be rain, however, as our Waldameer day was cut a bit short due to a storm that came in. When the campers arrived back at camp, Shadeland had lost electricity for a bit. That didn’t stop the campers from having fun, though. They enjoyed spending time in the barracks in the dark, for many of them said it felt like they were going through a “real” camp experience.

Fortunately, Friday morning the power came back on and the weather cleared up for the last night of camp, where the campers danced their hearts away at the annual Shadeland end of the week dance. As always, the mothers and fathers that volunteered this week did an outstanding job. The mothers prepared delicious meals and snacks for the campers and counselors, and the fathers kept the camp clean and running smoothly. On Saturday morning, the campers left Shadeland with smiles on their faces, excited already to come back next year, with one thought running through their brains: “All Roads Lead to Shadeland!” 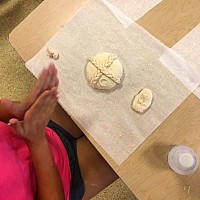