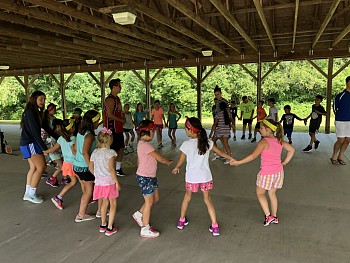 As the first week campers departed Shadeland on Saturday morning and week one came to an end, counselors and staff prepared for the start of week two. On Sunday afternoon, campers and parents were greeted with smiles and hugs as some had not seen each other since the previous year. The second week of Shadeland Camp was led by Father Sava Medakovich, Father Christopher Rocknage and Father Borjan Vitanov. As campers arrived and got settled in, our amazing mother volunteers cooked a delicious, welcoming dinner which led to a bonfire where all the campers, counselors, and priests got to know one another. At the Monday evening carnival, the campers played many carnival games and activities, including a dunk tank where they were able to dunk their favorite counselors and lifeguards. On Tuesday evening, campers, counselors, parents and priests took two buses to the local bowling alley. Along with bowling, the campers had a birthday surprise with cake and ice-cream. Just as in the first week, the older campers had many questions about our faith and our camp theme: Prayer. On Wednesday night, the priests led a late night question and answer session with the campers. On Thursday morning the campers, counselors and priests celebrated the Holy Liturgy with many partakers of the Holy Communion. After Liturgy and breakfast, the excited campers along with their counselors took three buses to Waldameer Park where they spent all day riding rides in the water park and in the amusement park. On Friday afternoon, when the camp week was coming to an end, the campers greeted His Grace Bishop Irinej. His Grace Bishop Irinej had lunch with campers and afterwards spent time with the campers asking questions along with a religion class. Once Friday evening came around, the campers learned about memorial services and together had a pomen for all the departed souls that resided on the Shadeland grounds. After dinner, the campers gathered in the dining hall for the Shadeland dance. The counselors put together an amazing playlist that had the campers on their feet all night. They danced to many different types of music including Serbian, American, Kolo and Rock n Roll music. The campers spent every morning learning about their faith, their culture, dancing kolo, singing Serbian songs, and learning to make Slava kolac. The father volunteers at camp did a great job working on the camp grounds along with putting together and painting new doors. As well as the fathers, the mothers and all volunteers did an amazing job keeping our children well fed and happy throughout the week. As week two comes to an end, we joyously exclaim “All Roads Lead to Shadeland!” 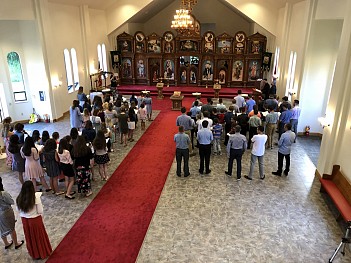