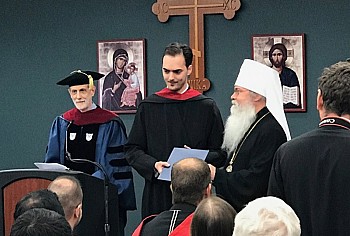 On Saturday morning, His Beatitude the Most Blessed Tikhon, Archbishop of Washington and Metropolitan of All America and Canada of the Orthodox Church in America (OCA), presided at Divine Liturgy at Three Hierarchs Chapel. He was joined by clergy from among the student body, faculty, and Board of Trustees.

Commencement began at the Metropolitan Philip Auditorium following the Divine Liturgy, lunch, and a Prayer Service. Among the many distinguished guests were two representatives of St. Nersess Armenian Seminary leadership: Bishop-Elect and Alumnus Very Rev. Daniel Findikyan, who was recently elected primate of the Eastern Diocese of the Armenian Church of America, and Priest Mardiros Chevian, the Dean of St. Nersess. Their presence was particularly meaningful at this Commencement, as 2018 marks the fiftieth year of cooperation between St. Vladimir’s and St. Nersess Seminaries. Additionally, at the 2018 ceremonies graduating seminarian Timothy Aznavourian became the first Armenian student chosen to deliver the Salutatory Address at a SVOTS commencement.

The Commencement Address was delivered by Dr. David Bradshaw, chair of the Department of Philosophy at the University of Kentucky. He spoke to the graduating class of the need to share, in particular, three beautiful aspects of Orthodox Christianity still largely unknown or misunderstood in the secular world: Orthodox worship, the wisdom and example of saints and monasticism, and forgiveness.

“The day of commencement often finds us at a disorienting moment, standing at the crossroads of unfamiliar paths…” said Nikiforos. “However, today Christ tells us, through the Prophet Jeremiah, ‘Stand at the crossroads and look; ask for the ancient paths; ask where the good way is, and walk in it, and I will give rest for your souls’ [Jer 6.16].”

Graduate Stefan Djoric, a student of the Diocese of Eastern America of the Serbian Orthodox Church, recounted his experience at SVOTS by noting: “As a student of St. Vladimir’s Seminary, I had an extraordinary experience living and studying there during my two years of Master of Arts program. I attended classes, prepared exams and had at least forty five hours of studying during week together with my other classmates. My life at St. Vladimir’s Seminary included also a community assignment every week and on top of that I volunteered many times to host special events, greet strangers and welcome prospective students.

“Since I am particularly interested in the area of patristics, I had an honor to work with very reverend Fr. John Behr who was mentoring my MA thesis. I wrote on the topic of ‘The Noetic Anthropology of Gregory of Nyssa in his work De Opificio Hominis.’ I’ve been given an ‘A’ grade for my work on that topic."

“Overall, my experience at St. Vladimir’s Seminary is very positive. It can be very well described as the life of determination, discipline and sacrifice.”