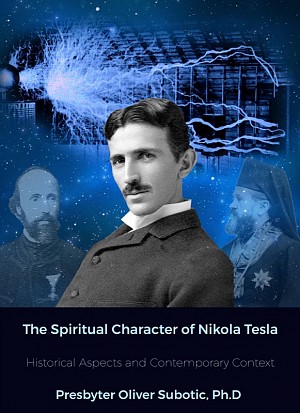 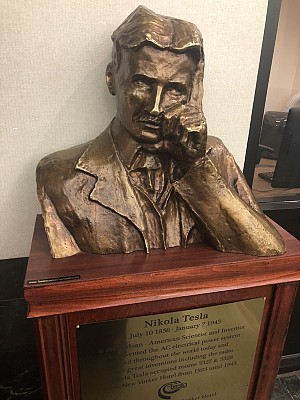 During the period of April 22-29 in the United States, with the blessing of His Grace Bishop Irinej, Serbian Orthodox Bishop of Eastern America, a series of lectures on the spiritual character of Nikola Tesla were held. The lectures were presented by Rev. Dr. Oliver Subotic, editor of the publication The Orthodox Missionary and designated representative responsible for the Missionary Department of the Holy Episcopal Synod of the Serbian Orthodox Church. The coordinator for this missionary project in the Eastern American Diocese was the Rev. Vladislav Golic, parish priest in Lackawanna, NY

The first lecture was held on April 22 at the History Museum in Buffalo, NY. In addition to the Museum, organizers of the event included the Tesla Festival of Buffalo, and the parish community of St. Stephen the Archdeacon and First Martyr parish in Lackawanna, NY. Attendance at the lecture was unexpectedly large, with over 200 persons present for the lecture. The greatest number of those in attendance were Americans who were not themselves Orthodox, but who held in high esteem the person and work of Nikola Tesla. Due to the long lines in front of the Museum who were waiting for admission, hoping to purchase tickets and find their seats, the lecture began a little later than anticipated.

At the beginning of the presentation, those in attendance were greeted by Megan McNeill, Program Coordinator of the History Museum, and Martin McGee, founder of the Tesla Festival. Immediately thereafter, a miniature model of the Nikola Tesla statue, the work of sculptor Larry Giffis, was presented. The plan is to have a park dedicated to Nikola Tesla, opposite the building where he gave his famous speech, and that in this park, a large statue of our scientist will be erected according to the model. Just prior to the lecture, an exclusive public showing of an excellent documentary in English regarding Nikola Tesla was shown. The documentary was shown with the permission of the Nikola Tesla Museum in Belgrade, which produced the film. Then via a video connection, the director of the Nikola Tesla Museum, Dr. Branimir Jovanovic, one of the greatest experts on the person and achievements of our genius-inventor, addressed the assembly. He greeted those present and announced the future cooperation with Fr. Oliver Subotic , illuminating of the phenomenological spirituality of Nikola Tesla. At that point, Fr. Oliver, in a 45-minute lecture in English, revealed further concrete aspects concerning the spirituality of Nikola Tesla:  his family life; his youthful years; the spiritual beliefs of scientists during the period of [his] worldwide fame; his attitude towards Christianity and other world religions; [his] relationship toward Serbia, the Serbian people, tradition, culture…all pointed to a Christian commitment of our famous scientists in [their] essential beliefs. At the end of his presentation, the lecturer made a comparison between St. Sava, the greatest Serbian saint, and Nikola Tesla, the greatest Serbian inventor, indicating that both of these two great men of our people, faithfully listened to the call of their hearts and their lives, understanding their mission as that entrusted to them by God, for which they tirelessly worked to increase their talents and, each in his own way, labored for the benefit of their loved ones. At the end of his lecture, Father Oliver pointed out that each parent, teacher, priest… and in general every person has his/her life’s missionary task, citing the example of Georgene-Djuka Tesla, whose mission was not to become a world famous inventor, but rather to raise a world-renowned inventor, which she achieved.

A significant number of Americans asked questions of Fr. Oliver after the lecture, after which they spoke to the organizers and the lecturer in direct conversation.  After the lecture, Fr. Oliver, together with the organizers of the presentation, visited Niagara Falls where, at the end of the 19th century for the first time in the history of civilization, electrical energy was transmitted a substantial distance, illuminating the city of Buffalo.

The third lecture on the spirituality of Nikola Tesla was held in Boston, MA, on April 28, in the conference room of the Church of St. Sava. After an introduction by Fr. Aleksandar Vlajkovic, elder clergy of the church and organizer of the lecture, the film on Tesla was shown along with the video message of Dr. Branimir Jovanovic. Then Fr. Oliver addressed the small group of parishioners from the church who were present, and who were a select group of the church’s population, which became evident from questions they later posed. Since through their questions it was clear that they were exclusively Serbs, the lecture was in the Serbian language. At the end, Fr. Aleksandar Vlajkovic thanked Fr. Oliver on his own behalf and on behalf of those parishioners who were present, and expressed his desire that a new lecture take place in Boston on this theme.  Earlier in the day, Fr. Oliver had the opportunity to visit the Holy Cross School of Theology. Included in Fr. Aleksandar’s group was a person from one of the most prestigious universities in the world—Harvard. A visit to the Boston Museum of Science was also on the agenda. The Museum houses some of Tesla’s discoveries, and provided the setting for a very effective presentation.

The fourth lecture on Tesla’s spiritual character was held in New York on April 29, in the parlors of the Greek Orthodox Church of St. Eleftherios, where the Serbian community gathers for the Divine Liturgy while repairs and renovations to their own church are being completed. Due to the tragic fire that ravaged the New York Cathedral of St. Sava, the community must temporarily worship in another location.   After introductory remarks by Protodeacon Jovan Anicic, the Director of Education for the Diocese of Eastern America, and organizer of the lecture in this parish, the documentary film on Tesla and the video presentation of the Director of the Nikola Tesla Museum in Belgrade was shown. Along with the Serbs who remained after the Holy Liturgy, the lecture was also attended by Greeks who were present in the hall and who had a keen interest in the person of Nikola Tesla. For this reason, the lecturer spoke in English so the Greeks who were present could hear about the Serbian scientific genius. At the completion of the lecture, Protodeacon Jovan accompanied Fr. Oliver on a tour of New York’s major sites, where Nikola Tesla lived the last ten years of his life, and where he reposed. In the afternoon, a visit to the St. Vladimir Theological Seminary was included in the tour.

There is obvious interest in Nikola Tesla in the United States of America, and that interest, by all accounts, is most present among the American population. With this in mind, God willing, the forthcoming volume on the spiritual character of Nikola Tesla in the English language will be an excellent opportunity to get to know our scientist from a new perspective, which until now has not been highlighted. 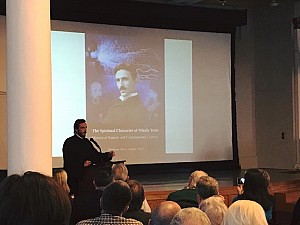