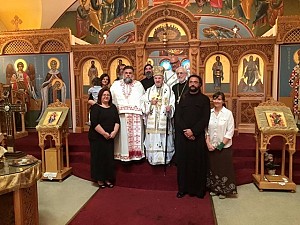 During the Divine Liturgy, His Grace recognized Very Reverend Stephen Zaremba for his extensive, faithful and inspiring twenty five years of priestly work. Father Stephan was awarded the Right of Wearing the Pectoral Cross.

During the same Hierarchical Divine Liturgy Subdeacon Panayioti from the parish in North Miami was ordained to the Holy Diaconate. The St. Sava Church was filled with faithful and approving believers.

A dinner and program were held in the church hall honoring Very Reverend Stavrophor Stephen on his Twenty-Fifth Anniversary of ordination. Youths from the parish and the Parish Executive Board were represented in the program.

In addition to serving the St. Sava Church, Father Stephen serves as the Dean of the St. Petersburg Deanery which includes parishes in Georgia, North Carolina and Florida.

Father Stephen previously faithfully served parishes in Midland and Youngwood, Pennsylvania and Elizabeth, New Jersey. He also served in the leadership position of Director of St. Sava Camp in Shadeland. Protinica Svetlana Zaremba with daughters Jovana and Aleksandra and son Nikola were recognized for their part in Father Stephen’s priesthood and shared in the joy of this celebration. 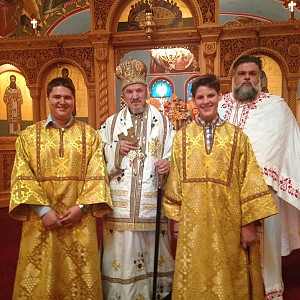