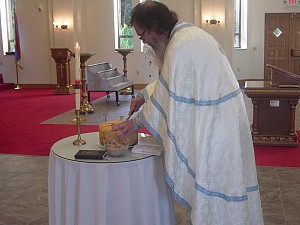 The Eastern Region Federation KSS celebrates the Feast of the Dormition of the Mother of God as the organizational Slava.  This year the Slava was celebrated on August 24, 2013 at the Most Holy Mother of God Monastery Church in Shadeland, Springboro, Pennsylvania.

The Federation works throughout the year for the benefit of the Eastern American Diocese of the Serbian Orthodox Church with the Archpastoral Blessings of His Grace Bishop Dr. MITROPHAN.  Very Reverend Stavrofor Dragoljub Malich, Episcopal Deputy, is the Spiritual Advisor of the Federation.

The Federation’s most visible presence is at the St. Sava Camp, Shadeland, Springboro in Crawford County, Pennsylvania. The work and support of the Federation has benefitted youths from throughout the Diocese as well as from parishes beyond the Diocese when they attend the four weeks of summer camp. The Federation is instrumental in the success of Diocesan Day each year held at the Monastery of the Most Holy Mother of God and St.Sava Camp, Shadeland.

The Federation actively participates in the St. Nikodim Chapel Slava each year at the Episcopal Residence in Mars, Pennsylvania.  Kolo members work in a variety of projects in the various parishes in the Eastern Diocese throughout the year and have a significant impact on parish and Diocesan church life.

The Federation has consistently provided support for Clergy Seminars held at Shadeland each year and for the Winter Retreats for youths held in December for a number of years.

The Federation officers and members give of themselves generously and voluntarily for the benefit of the Eastern American Diocese. They set examples of love for God’s Holy Church by put their faith in action.