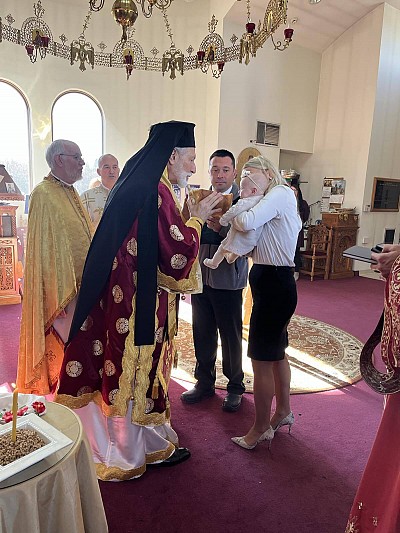 On Monday, November 21, 2022, His Grace Bishop Irinej of Eastern America celebrated the Holy and Divine Liturgy, concelebrated by Protopresbyter-Stavrophor Rade Merick, Episcopal Deputy, who celebrated his Patronal Feast - Slava, and assisted by Deacons Teodor Sokolovic and Michael Pancoe, the latter of whom celebrated his Names Day.

Participating in the sacred service were Nun Anastasia and Novice Milunka; while responses were solemnly rendered by Dr Nikola and Susan Resanovic, joined by Mirjana Damljanovic.

In his homily, Bishop Irinej spoke of the particular meaning of this liturgical celebration, which places us with increased cognizance at the cusp of the visible and invisible worlds, manifesting the heavenly and earthly realms in our midst. We are summoned to discern the power and presence of the angelic world, through prayer and awareness.

Expounding on a theologoumenon of St. Gregory of Nyssa, His Grace spoke of how infants and children in their innocence are intuitively capable of seeing and interacting with the angelic world, which tends to dissipate with accruement of reason and rationality. The same became visibly manifest in watching the joy of an infant receiving her first Holy Communion and participating in the turning of her first Festal bread - Slavski kolach.

We are all summoned to be like children, so that we can inherit the Kingdom of Heaven. May the Holy Archangels Michael and Gabriel, together with our Guardian Angels and the Heavenly Hosts, ever lead us on that path of innocence toward life eternal. 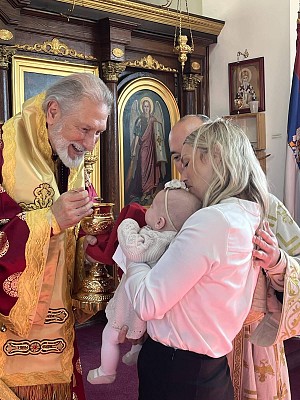