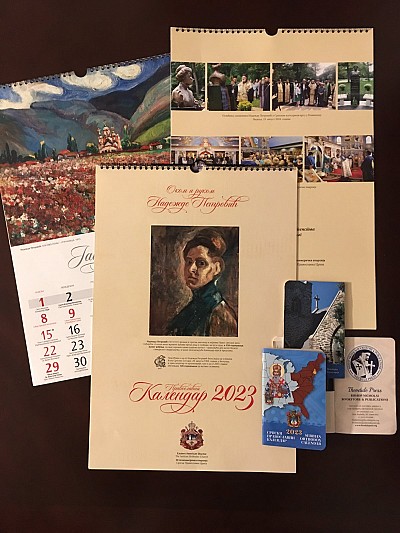 The Diocese of Eastern America proudly announces the availability of its 2023 Serbian Orthodox Pocket and Wall Calendars, which may be acquired from Theodule Press: Bishop Nicholai Bookstore and Publications (https://www.theodulepress.org).

The bi-lingual 2023 Pocket Calendar is dedicated to the 60th Anniversary of the Episcopal Consecration of Bishop Stefan (Lastavica), first hierarch of the Diocese of Eastern America and Canada at the St. Elijah Church in Aliquippa, PA (13 July 1963-2023).

The Yearbook section showcases wonderful memories of events from the life of the Eastern America Diocese, such as the Centennial Celebration of the founding of the first Serbian Orthodox Diocese of the United States of America and Canada (1921-2021); the 50th Anniversary celebrations of the Holy Ascension Parish in Elizabeth, NJ and the Holy Trinity Cathedral in Pittsburgh, PA (1972-2022); as well as ordinations, blessings and the like from 2022.

An up-to-date comprehensive Directory of the Diocese of Eastern America and all its constituent entities and ministries is, as always, included, as well as other important calendar reminders, featuring both Orthodox Christian feast days and fasts, and U.S. Federal Holidays to help plan forthcoming annual events.

A true keepsake for every institution, household, and individual of the Eastern American Diocese and wider.

The 2023 Wall Calendar (Serbian only) uniquely features the commemoration of the 150th Anniversary of the birth of the great Serbian artist and admired World War I heroine, Nadezda Petrovic (11 October 1873-2023). Titled, “Through the Eye and Hand of Nadezda Petrovic”, this luxurious edition of the wall calendar features her self-portrait on the cover page, as well as a beautiful selection of twelve of her most famous works of art, which can be framed and displayed in homes, offices, church schools and centers.

Importantly, this upcoming 2023 celebratory year also represents the 120th Anniversary of the founding of the Circle of Serbian Sister on The Great Feast of the Dormition (28 August 1903-2023). One of the instrumental founders of the Circle of Serbian Sister was precisely, Nadezda Petrovic, a bronze bust of whom is featured at the Serbian Cultural Garden in Rockefeller Park, Cleveland, Ohio (http://serbianculturalgarden.org).

In light of the same, look for announcements concerning a gala celebration in 2023 of these two meaningful anniversaries, hosted by the Eastern American Diocesan Federation of the Circles of Serbian Sisters.

May the Year of the Grace of our Lord, Two-Thousand and Twenty-Three, be filled with rich and rewarding blessings, and peace for all!