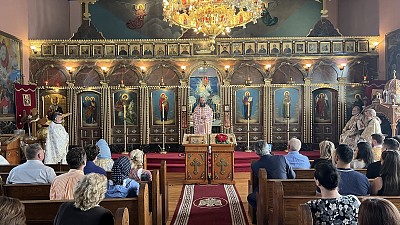 On Sunday, August 14, 2022, the Paterson parish of St. John the Baptist was visited by the Most Venerable Archimandrite Metodije, Abbot of the Royal Lavra, Hilandar Monastery on Mount Athos. Archimandrite Metodije was accompanied by Hierodeacon Nektarije. The Hierarchical Divine Liturgy was officiated by His Grace Bishop Irinej of Eastern America. His Grace was joined in concelebration by Archimandrite Metodije, Protopresbyter-Stavrophores Ilija Balach and Zoran Radovic, Protopresbyters Aleksa Micich and Djokan Majstorovic, local parish priest, assisted by Hierodeacon Nektarije, and Deacons Darko Tripkovic and Vladimir Srbljak.

Even though it was a hot summer day, many faithful, who piously followed the Liturgy with enthusiasm, came to greet our dear guest and receive his holy blessing, and were especially encouraged by his instructive sermon on the Gospel.

Abbot Metodije spoke about the test of faith of the Holy Apostle Peter, while walking on water, which is also our daily test, regardless of our spiritual level. Hearing the wind, Peter began to sink into the depths of the sea due to his lack of faith and the Lord saved him. Likewise, when we fall, we should not despair that our fall is hopeless. We need to straighten up and make amends with repentance, as the Merciful Lord is there to accept and save us, just as he saved the Holy Apostle Peter.

After the Divine Liturgy, an agape meal was prepared in the church hall for all present. Our dear guest, Abbot Metodije, spoke about Mount Athos, the founding of the Hilandar Monastery, its founders, Stefan Nemanja, St. Simeon and his son Rastko, St. Sava. He also spoke about the spiritual and educational significance of the monastery through its history for Serbs and Serbian Orthodoxy and about the tragic fire in March 2004. He emphasized that after the fire, most of the monastery's accommodation was renovated, but funds are still being collected for the completion of the renovation and for the second construction and improvement of Hilandar Monastery.

The parish priest, Father Djokan, invited those present to give their voluntary contributions and to write the names of the living and the departed to be mentioned at the daily Holy Liturgies at the Hilandar Monastery. Anyone who was not present can also send a gift and names. Make check payable to: Preserve Monastery Hilandar Fund and mail to: 1529 72nd St #21, Brooklyn, NY 11228.

At the end of the discussion, Abbot Metodije presented Bishop Irinej with a beautiful icon of the Mother of God “of the Three Hands”, and a Grammaton of Recognition for being the first donor to the then newly incepted Preserve Monastery Hilandar. In turn, Bishop Irinej gifted Abbot Metodije with a hand-made pectoral cross, together with a monetary contribution for the monastery from the clergy, monastics and faithful of the Diocese of Eastern America. Upon exchanging gifts, Abbot Methodije also distributed Hilandar Grammata of Appreciation to prominent donors. 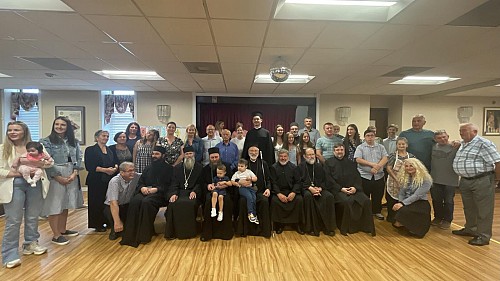 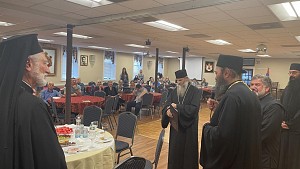