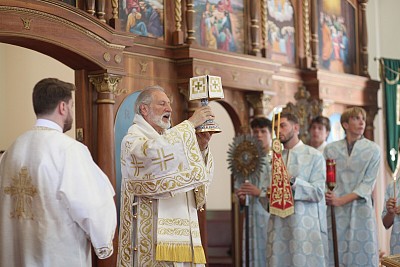 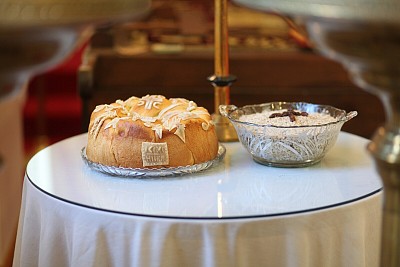 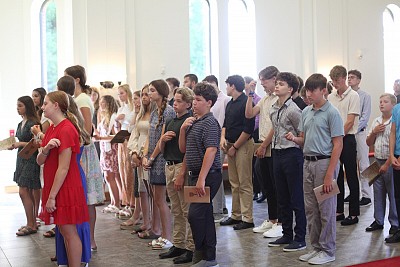 Week 4, Tambura Week at St. Sava Camp in Shadeland, PA, began on July 31, 2022.  Eighty-one campers arrived at camp, excited and ready for a week of singing, dancing, and fun. The bonfire began with head counselor, Stana Topich, going over the rules.  Shortly after that, the campers' love of dancing and singing was evident. Campers, counselors, and priests were all kolo dancing and enjoying being together again.

Early Monday morning, campers began their day like every morning, with a walk to our beautiful church and prayers. The campers were well fed each day by the loving moms, dads, and babas that volunteered for the week. Shortly after breakfast, work on the program began. Under the enthusiastic direction of Mia Cirkic and assistant Dushie Karas, each group began to learn their show. The campers know that this is serious business as they only have five days to prepare for the big day. The campers were motivated, talented and enthusiastic each day to learn their dances. Often you could hear a group cheering as they completed a difficult step sequence.

When the campers weren’t dancing, the sounds of their beautiful voices led by Stana Topich could be heard. Boba Vlajkovic taught liturgical music to a volunteer group of campers. As the week progressed, the campers did normal camp activities like swimming, boating, and basketball, along with continuing to practice their dancing, singing, and playing their tamburas. They were entertained by head counselors Natalie Dean and Stana Topich along with their fellow counselors: Marianne Bajich, Mia Cirkic, Jelena Winowich, Maja Jelich, Boba Vlajkovic, Dushie Karas, Michael Topich, Milutin Dobrijevic, and Sava Topich. The week would not run so smoothly without this amazing crew.

On Tuesday, August 2nd, we celebrated the Holy Prophet Elijah – Sveti Ilija, with liturgy before the start of our day. The highlight of each week is the trip to Waldameer Park & Water World. Although it was a bit rainy, the hot weather made it a great day to be at the park. On Friday evening, all the volunteers were excited to finally review the final run-through of the show. There were very few dry eyes among the kitchen staff as we watched the children do what they truly love. Thereafter, the Friday night dance lasted late into the night, and was enjoyed by all. 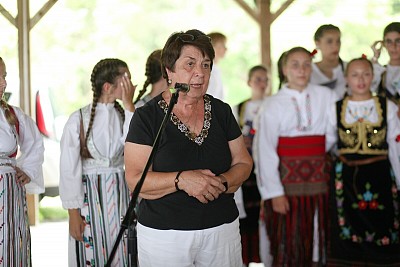 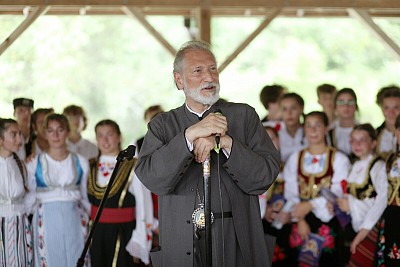 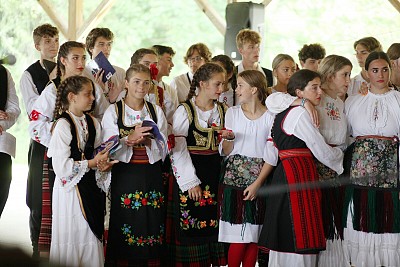 On Saturday, August 6th, our picnic day was a very warm and beautiful sunny day. The day began with the celebration of the Hierarchical Divine Liturgy officiated by His Grace Bishop Irinej of Eastern America. His Grace was joined in concelebration by diocesan clergy, many of whom devoted their time to be with the children at Shadeland during the 2022 camp season. The monastery church of the Most Holy Mother of God was filled with campers, youth, counselors, parents, and many faithful visitors from the United States and Canada.  The campers under the direction of Boba Vlajkovic inspiringly sang the responses to the Liturgy.  During his homily, the Bishop spoke to the campers and all present about the Holy Orthodox Faith in the context of our contemporary society and all of its temptations.  His Grace emphasized the fact that too often we wonder whether the Orthodox Church has the answers to modern dilemmas. Instead of looking for answers, which already exist in the Church, Bishop Irinej taught us what we need to do is learn to ask the right questions. The answers are already there. Memorial petitions were offered for those who perished in “Operation Storm” – Oluja, and at the conclusion of the service, the Rite of the Patronal Feast – Slava was celebrated in honor of the Venerable Mother Angelina of Krushedol.

Following a brief lunch, the long-anticipated show began with the rendition of the American, Canadian and Serbian National Anthems. The folkloric performances of all three groups were outstanding. The crowd enthusiastically gave a lasting standing ovation to the nineteen seniors that ended the show forming a row in front of the elated audience.  Congratulations to these wonderful youth and to all the children who made this program and camp season a tremendous success.  We hope to see you back soon as counselors. At the conclusion of the show, all sang our beloved St. Sava Hymn, which ends with a verse composed especially for us in the Diaspora, “and we your little Serbs, on this side of the ocean...”.  Thank you for a wonderful season. We look forward to next year! And, as our Bishop noted, be certain to bring a friend! 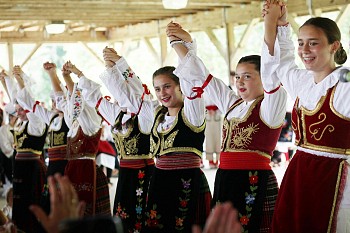