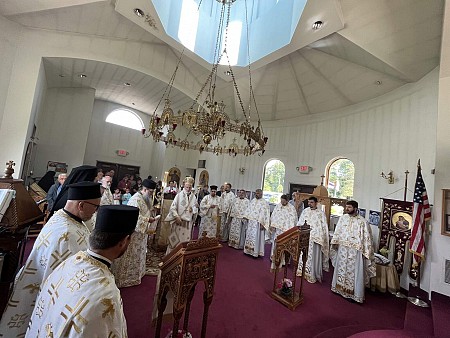 During the celebration of the Divine Liturgy, Bishop Irinej spoke of the deep and profound meaning of this liturgical celebration. Noting, as every liturgy, todays, brings us to the very cusp of the visible and invisible creation, the latter of which the angelic realm belongs. Yet, from time to time, the invisible manifests itself in our visible world. Honoring the heavenly hosts, God's messengers, particularly the Holy Archangel Gabriel, whom we now honor, by name alone, Gabriel, is God's Strength in Hebrew, is the bearer of glad tidings and the herald of visions. He presents the message of the Lord in a discernable manner to people, so that they can accept it with a pure heart: "I am Gabriel, who stand in the presence of God; and I was sent to speak to you, and to bring you this good news" (Luke 1:19). 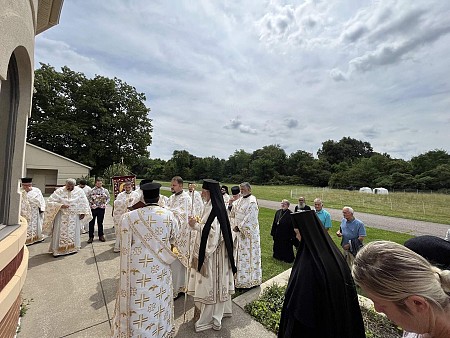 During the Holy Liturgy, the founders, Bishop Sava of Shumadija (formerly, Eastern America and Canada) and Mother Evpraksija (Paunovic); as well as benefactors, Mother Ana (Radetic) and Nikola Borota, together with the clergy who served the monastery; and the many donors and beautifiers of the monastery were remembered. Toward the conclusion of the liturgy, the Rite of the Patronal Feast was executed with its three processions around the monastery church and the reading of the four Gospel lections at each side of the temple. As the third stasis was completed, a floral cross was placed before the bronze bust of Bishop Sava of Blessed Memory and following the fourth and final stasis for the departed, the grave of Mother Ana was also blessed. Arriving at the front of the temple, the cutting of the Festal Bread - Slavski Kolach and the blessing of the Wheat - Koljivo proceeded. The Host - Kum for the Slava was Miodrag Michael Simic, together with his family. Diane and George Grahovac received the Slava for the following year.

The traditional Orthodox Christian philoxenia - love of guests and strangers, which is considered a primary virtue, most especially in monastic communities, was lovingly organized and executed by Sister Anastasia (Gousis), Novice Milunka (Pejoska), together with members of the Circles of Serbian Sisters from the Cleveland Deanery, and other friends of the Monastery. In the tranquil, rural setting of the monastery, surrounded by sheep, goats, bees and flora, tents were pitched for the refreshment and enjoyment of all present at the afternoon Agape Meal. Once again, through the goodness of FOCUS Cleveland and its St. Herman House of Hospitality, domestic honey from the monastery grounds was made available for all guests to purchase, enjoy its health benefits, and support this crucial mission.

The New Marcha Monastery remains a true oasis of spirituality for all who visit, worship and prayer therein, a true blessing for the Diocese of Eastern America and the Pan-Orthodox Community of Greater Cleveland. 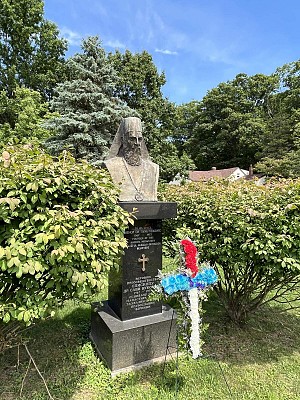