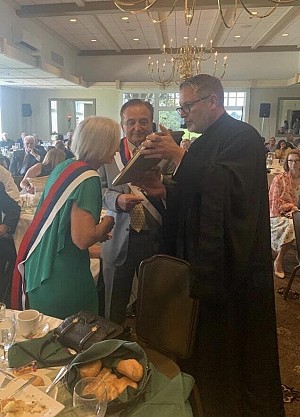 On Sunday, June 12th, the day our Holy Orthodox Church celebrates and commemorates Pentecost, the Descent of the Holy Spirit on the Apostles, the Holy Trinity Serbian Orthodox Cathedral in Pittsburgh celebrated its Feast Day - Slava. Due to last year’s global pandemic, it was decided that the 50th anniversary of the consecration of our church be celebrated this year.

At the conclusion of Divine Liturgy, the faithful participated in the festal procession in the church, due to rain, followed by the service of blessing of the Festal Bread - Slavski Kolac and Wheat - Koljivo. Drs. Nenad and Milena Janicijevic, great benefactors of our parish, served as honorable hosts - kumovi. “Christ is in our midst! He is and forever shall be!" was proclaimed by the many faithful gathered - a huge attendance for Slava. Accepting the honor for next year’s Slavawere Bob (Bozidar) and Nancy Topich.

The festal banquet and grand celebration was held at the neighboring South Hills Country Club. Joining in attendance were the Very Rev Protopresbyters Stavrophors, Rodney Torbic and Stevo Rocknage. Serving as Master of Ceremonies, Dane Topich introduced our Jedinstvo folklore ensemble and Holy Trinity Cathedral choir who provided their well-prepared performances for our enjoyment. Following the celebration in song and dance, a 10-minute video presentation about the bountiful history of our Cathedral, from its inception to the present times, was played. It was truly an emotional and moving presentation which brought a few tears and warmed the hearts of all. Speeches were offered by Dessa Mrvos, President of the Holy Trinity parish board, who greeted all in attendance and thanked the many parishioners and all auxiliary organizations for their ongoing support of our parish. Honored kum and great benefactor of Holy Trinity Catherdral, Dr. Nenad, addressed the gathering by first giving thanks to God for all His blessings! He proceeded to speak of his beginnings: the son of a priest, Dr. Nenad was suitably nurtured in the Orthodox faith and Serbian history. Both of his parents were orphans of WWI. From an early age, Dr. Nenad’s awareness of the suffering of others caused him to know innately that his destiny would be to ease suffering and to save lives. When the civil war erupted in 1991, his childhood inclinations came to fruit. He spearheaded war relief efforts initially in the Holy Trinity congregation, and then as Medical Chairman of the Eastern American Diocese Relief Committee. He endeavored to coordinate large-scale humanitarian relief, bridging procurement of medical supplies and medications with direct delivery to areas of greatest need in Krajina, Bosnia and Serbia, coordinating with the church as well as other humanitarian agencies. Through these notable efforts, the resultant successes of lives saved, and souls aided are known only to God. He remembered and recognized Milan Puskar of Mylan Laboratories, thanking him for his love and generosity, as he was instrumental in the humanitarian relief program. Bob Stone, Nick Stone, and George Topich were also recognized by Dr. Nenad for their aid and support of the church both in the United States and in the homeland. At the conclusion of his speed, Dr. Nenad received a standing ovation. Following Dr. Nenad, Fr. George addressed the faithful gathered. Firstly, he thanked Almighty God in the Holy Trinity for the abundant mercy and blessings on our parish. He thanked His Grace Bishop Irinej for bestowing upon him the great honor of appointing him parish priest of Holy Trinity. He thanked the parishioners, beautifiers, and supporters of the parish. He also acknowledged and reminded everyone that our honored kum, Dr. Nenad, was awarded the St. Sava Medal of the First Degree by Patriarch Pavle of blessed memory, for his exceptional meritorious conduct and achievements in humanitarian aid for the Serbian nation and the Serbian Orthodox Church, the value of which exceeded 156 million dollars. Likewise, Dr. Nenad was honored by Prince Aleksandar Karadjordjevic for his wartime and post-war efforts. Furthermore, Dr. Nenad served in various capacities with the Serbian delegation in talks with United States senators and congressmen in disputes of blatant anti-Serbian federal policy. Dr. Nenad also spearheaded the organizing of public demonstrations in support of Serbia both locally and in Washington D.C., publicly orating against the grievous actions of the United States government and NATO. On behalf of the parish, Fr. George gifted Drs. Nenad and Milena a reproduction of an icon of the Pech Holy Mother of God as a sign of love and gratitude and in remembrance of this grand day. To fully account for the lives touched by these two notable individuals, Drs. Nenad and Milena, is impossible. We extol them, nonetheless, for their service to our Lord and Savior Jesus Christ in the Holy Trinity, who sees all and knows all. We honor them as parishioners, congratulate them as kumovi, and gleefully proclaim: Ziveli! na Mnogaja Ljeta!

We pray that our Merciful Lord continues to bless the Holy Trinity Serbian Orthodox Cathedral and its faithful for many more years under the Omophorion of His Grace Bishop Irinej, Amen! 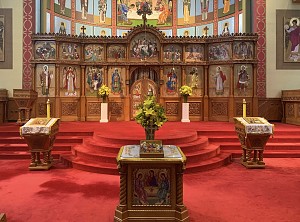