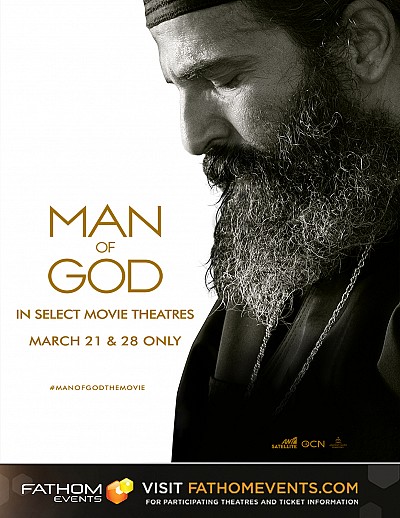 Exiled unjustly, convicted without a trial and slandered without cause, St. Nektarios of Aegina’s life was one of persecution and prosecution. A priest of the common people, St. Nektarios’s popularity provoked the jealousy of the clergy in Alexandria and, as a result, he was defrocked and expelled from Egypt. In contrast to his religious “superiors”, Nektarios cared for the poor, taught peasant girls to read and write, and performed miracles. Even his last moment on earth was used to help another: upon his death, Nektarios’ undergarment was removed, and as it fell upon a paralyzed man in the hospital bed next to him, the lame man miraculously arose to walk. So, too, do we hope MAN OF GOD will awaken the paralyzed faith in audiences around the world.

Nektarios was recognized as a saint in the Eastern Orthodox Church in 1961, and his feast day is celebrated Nov. 9. The music for the film was composed by two-time French Cesar winner Zbigniew Preisner with special performance by Golden Globe winner Lisa Gerrard.

The film was written by Yelena Popovic and produced by Simeon Entertainment, Alexandros Potter, co-producer and View Master Films in association with the Holy Great Monastery of Vatopedi, St. Maxim The Greek Institute, The Holy Metropolis of Mesogaia and Lavreotiki and Eurogroup, and with the support of Ingenuity-FO, Deep Dream, NP Insurance, Minetta Insurance and EKOME (The National Center of Audiovisual Media and Communication). In the US, promotional partners include Antenna 1 Satellite, Orthodox Christian Network and Ancient Faith Ministries. Pinnacle Peak Pictures (fka Pure Flix) is handling international sales for the film.