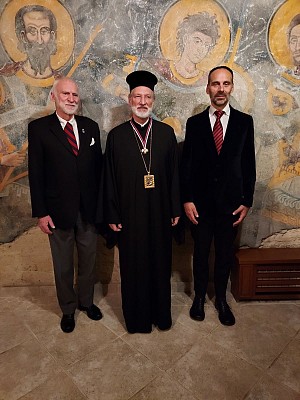 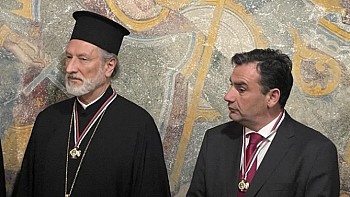 His Royal Highness Prince Davit Bagration Muhranbatoni, Head of the Royal House of Georgia – the oldest Orthodox Monarchy, and Her Royal Highness Princess Irina Bagration Muhrani arrived to visit Serbia on December 6, 2021, at the kind invitation of Mr. Stefan Krkobabic, Vice President of the National Assembly of the Republic of Serbia, and organized by the Rectorate of the Order of the Eagle of Georgia and the Seamless Tunic of our Lord Jesus Christ, led by Mr. Aleksandar Djurdjev, MP in the Assembly of AP Vojvodina, as Rector for Serbia, and Deacon Hadzi Nenad M. Jovanovic, Secretary of the Center for the Study of Orthodox Monarchism, as Chaplain of the Royal Orders of Georgia in Serbia.

His Grace Bishop Irinej of Eastern America was formerly Chaplain for the Order of the Eagle of Georgia and the Seamless Tunic of our Lord Jesus Christ in Australia and New Zealand and holds four distinct Orders from Prince Davit.

The visit began with an investiture ceremony, wherein His Highness Prince David and Bishop Irinej were decorated with a high and distinguished church and social Order - The Cross of Leader George Stratimirovic. The investiture ceremony was performed by prof. Ivan Stratimirovic and prof. Dr. Djordje Stratimirovic, on behalf of the family; Mr. Danijel Kulacin, on behalf of the Center, and Deacon Hadzi Nenad, on behalf of the Board. The solemn ceremony was attended by Economos Dr. Vasilije Vranic, parish priest in Washington, DC; Mr. Aleksandar Djurdjev; Mr. Goran Milenkovic, Assistant Minister in the Ministry of Rural Care in the Government of Serbia, and Mr. Gojko Raicevic, editor-in-chief of one of the most important and influential information portals in the Serbian language - IN4S. 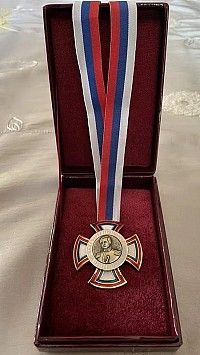