PATRONAL FEAST OF SAINT STEPHEN OF DECHANI IN COLUMBUS 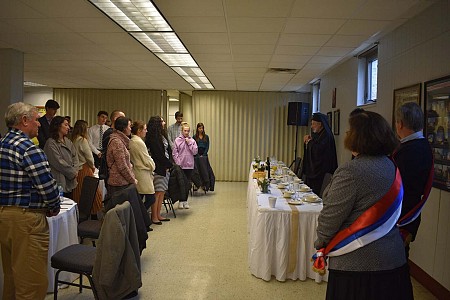 On the twenty-third Sunday after Pentecost, on November 28, 2021, the parish of St. Stephen of Dechani in Columbus, Ohio, celebrated its Patronal Feast - Slava.

Explaining the Gospel story of this Sunday, Bishop Irinej underlined the importance of the Gospel of the famous Gadarenes pigs, which is read twice during each liturgical year. Bishop Irinej also touched on details from the life of Saint Stephen of Dechani.

On that occasion, Bishop Irinej gave the following sermon:

“Today's Gospel reading speaks of some encounters, miraculous encounters. On the one hand, we have the encounter of Jesus Christ with demons. On the other hand, we have the encounter of the Jews with pigs, which they considered to be unclean animals. Each of these encounters, Christ with demons and Jews with pigs, speaks of what is clean and what is unclean in this world and whether something can be unclean in this world if God created all things as good and beautiful.

You have heard of a man who could not live among people because he was possessed by a multitude of demons. So many demons when Jesus Christ asked them, what are you called, the demons answered Legion. So, the whole troop of soldiers resided in one man. What did his countrymen do with him? They chained him and made him live among the dead in the cemetery, because he was not allowed to live among the people. That was his behavior, that is, the behavior of demons that resided in that one man.

And the Jewish people, who saw Christ, called Christ a man. However, the demons who lived in that unfortunate person recognized Christ as the Son of God and called him by that title: "Son of God, why did you come to torment us before our time?" And Christ said to them: "Come out from this man.” And they asked Him to cast them into the herd of pigs instead of casting them into the abyss. Why? Because the Jews considered pigs to be unclean animals, which Jews were not even allowed to consume. However, the pigs reacted and, not able to tolerate the presence of uncleanness, hurried to bathe and clean themselves in the nearby lake where they drowned.

In this situation, we are faced with a test of our spiritual maturity. And that is why this Gospel story is so important. We, like the Jews of that time, tend to look at everything that happens before our eyes, whether physical or spiritual, and ask how Christ could have allowed it to happen, such as allowing evil spirits to enter into pigs and make them drown themselves. The first human reaction is to have pity for the animals. However, in doing so, we put ourselves in a very ungrateful position because, according to the wise words of Saint Bishop Nicholai, we believe that we humans have more pity than the Lord God Jesus Christ Who created us and those pigs.

It is a complex situation because few people know how to rejoice over the healing of that one man, to whom Christ restored his human dignity so that he could stand upright among the people and no longer interact with society in chains.

Only children know how to rejoice for another child when something good happens to that other child. And that is why the Lord tells us that we will enter the Kingdom of heaven if we are like children. Let us not be like those Jews who told the Lord to leave them. Why? Because every person is afraid of cleansing. It is easier and more comfortable to live with our own demons than in purity. And that is the goal and purpose of this Gospel story.

Today we celebrate the memory of one of our great Serbian kings and Saints, Stephen of Dechani. His name, Stephen, means “one who wears a crown”, like Saint Stephen the Protomartyr. He is called Dechanski because he built the great church of Dechani, High Dechani. He gave such a gift to the Serbian people, to the Serbian church, to all Orthodox Christians. And indeed, because Dechani is under protection of UNESCO, the United Nations organization that cares for world heritage. Your Saint Stephen of Dechani gave to the world a tremendous gift. And, yet, people out of jealousy during his life time, even his father, tormented this man even blinded him and sent him into exile and so on. And yet blind as he was, he built this most magnificent church of beige and purple marble. And this church stands to this day. This church you see and in fact that it was built when he was blind tells us that no matter in what situation we find ourselves, no matter what test or temptation we can pass the test and not fall in temptation. Stephen of Dechani could have said: ‘I can’t do anything. Lord, you didn’t help me. Why should I bother celebrate you?’ And yet, by his faith, his eyesight was returned to him by Saint Nicholas. He was given back his vision.

We can each be given back our vision when we will sight of where we are going in life. And so, he is for all of us a tremendous example of how one should lead their lives. His relics are incorrupt. That monastery holds such special spiritual power. This change is possible for everyone in their lives. So, if you want your wholeness return to you as Christ return to this poor man possessed with demons you simply have to have faith. Pray and God will hear every prayer and he will answer. May you have a wonderful and blessed celebration of this feast.”

During the Divine Liturgy, many children drew near to the Chalice, and the blessing the Slava gifts of Wheat – Koljivo, wine and Festal Bread – Slavski kolach. The Hosts - Kumovi of this year’s Slava was the family of Svetislav and Vera Jovanovic with their children Marija and Kristina.

After the Holy Liturgy, a delicious Lenten meal was served. Father Isak Kisin thanked most cordially His Grace Bishop Irinej for increasing the church Slava with his patronal visit. Father Kisin also thanked brother clergy for coming as well as Jovanovic family for organizing the festive lunch. Father Isak Kisin concluded his talk by wishing good health to all, with the warm wishes that we all see each other again next year. 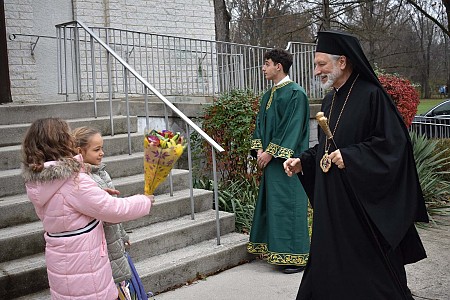 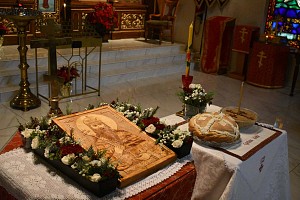