SEWICKLEY'S BIZIC HONORED FOR EFFORTS IN SERBIAN EDUCATION AND CULTURE 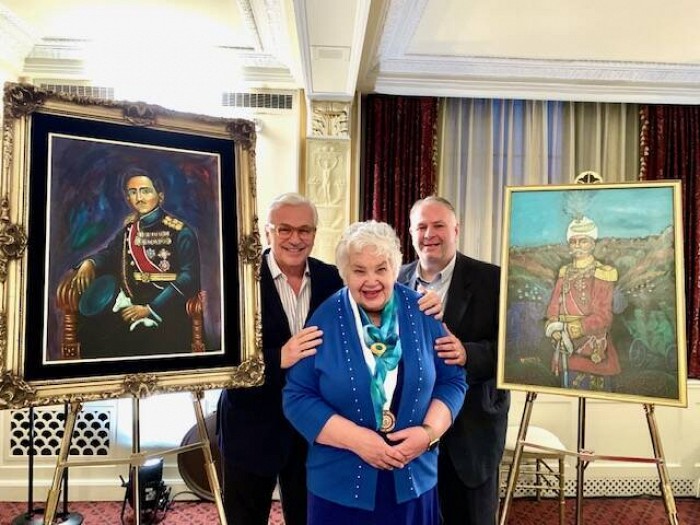 Milana “Mim” Bizic was very surprised when His Grace, the Right Reverend Irinej, Bishop of the Eastern American Serbian Orthodox Diocese, called her up to the podium at the Omni William Penn Omni Hotel with hundreds of guests present, to receive the highest award given to someone in the educational and cultural field of Serbia: the Order of the Holy Despot Stefan Lazarevich.

“Never in my wildest dreams would I have expected such recognition or such a high honor from the Patriarchate, or watching my Bishop Irinej raising the medal on high, joyfully asking the audience to exclaim ‘Axia’ (she is worthy) and ‘Živeli!’ which means ‘Long Live!’ I can’t believe so many of my family members knew of this secret and conspired to silence,” Bizic, a resident of Sewickley, said.

Services began Nov. 6, in the St. Elijah SOC in Aliquippa, with more than 30 clergymen in attendance from as far away as Miami. A luncheon followed. Afterward, people gathered to be present at the Blessing of the new Serb National Federation Headquarters. On Nov. 7, all local SOC parishes were closed so all could participate in the special services at Holy Trinity Cathedral in Pittsburgh, again with many hierarchs and priests present.

Bizic is no stranger to the Serbian people across the world. A retired teacher and librarian, she is recognized in the fields of education, technology and history. The recipient of many awards and recognitions, she writes prolifically in the American SRBOBRAN and in other publications and websites.

She has spoken on topics relating to Serbian history, and during the Homeland Wars in the 1990s, she participated in various demonstrations and protests that were held to bring light to the plight of her Serbian people. She founded a perpetual scholarship at the Serb National Federation, the Gustav and Milana Karlo Bizic award. She’s also a generous supporter of many churches and monasteries, and especially St. Elijah in Aliquippa, where she is a member of the St. Elijah Church Choir.

The new award was given to Bizic at the suggestion from her priest, V. Rev. Branislav Golic and her Bishop Irinej, from the 46th Patriarch of Serbia, the 60-year-old Porfirije, head of a church of 12 million people in Serbia, the other five former Yugoslavia republics and Dioceses in the U.S., Australia, and most of Western Europe and South America.