PROTOPRESBYTER +PETER TUTKO REPOSES IN THE LORD ON NOVEMBER 5, 2021. 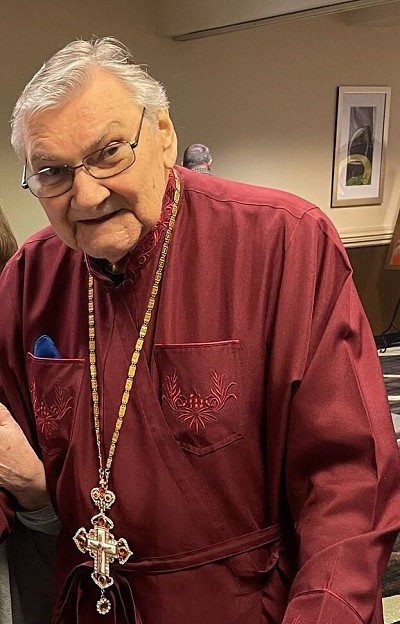 Protopresbyter Peter Tutko, 80, fell asleep in the Lord at home on Friday afternoon, November 5, 2021. Father Peter (and his recently departed wife, Matushka Sonja) served multiple parishes. Their ministry spanned over four decades of service to the Church, beginning in the Diocese of New England and then in the Diocese of the South of the Orthodox Church in America (OCA).

Father Peter was born on March 18, 1941, to Peter and Anastasia (Talalay) in Brooklyn, NY and from his youth was raised in service to the Orthodox Church starting at the Church of the Holy Trinity in Brooklyn. He served in the altar, sang in the choir, taught in the church school and directed the choir. He entered the Pre-Theological Program at Saint Vladimir’s Orthodox Theological Seminary when it was still located at Union Theological Seminary on West 121st Street. In the Summer of 1962, Father Peter was a member of the first Saint Vladimir’s Seminary Octet, that travelled to 80 parishes throughout the United States that summer. He met Sonja Horoschak on her birthday at Christ the Savior Church in Paramus, NJ and they would be married there in September 1968. The newly married couple then moved to South Canaan, PA, where Father Peter continued his theological studies at Saint Tikhon’s Orthodox Theological Seminary. Father Peter was ordained to the holy Diaconate by Archbishop Kiprian of Philadephia (OCA) in 1971. He then often served as deacon for Metroplitan Ireney (Bekish) (OCA). Deacon Peter received his Master of Divinity from Saint Tikhon’s Seminary in the Spring of 1973. On June 2nd, 1973, Metropolitan Ireney (Bekish) ordained him to the Holy Priesthood.

Father Peter (and Matushka Sonja) received their first pastoral assignment at Holy Trinity Church, Springfield, VT and also Holy Resurrection Church in Berlin, NH. It was here that Father Peter met Bishop Dmitri of Hartford, who would later become the first bishop of the new Diocese of the South of the Orthodox Church in America in 1979.  It was to Saint Andrew Church, in New Port Richey, that Father Peter became the first assigned priest by Bishop Dmitri in the newly formed Diocese of the South. In 1980, Father Peter and Matushka Sonja welcomed their son, Mark. Over the next 25 years, Father Peter labored in the Tampa Bay Area helping to establish parishes, educate the faithful, encourage college students, organize singers into Pan-Orthodox choirs. He had a special love of liturgical music, chanting and choral singing that remained with him his entire life. During this time Father Peter served the communities of Holy Trinity in St. Petersburg (later, Safety Harbor), Saint Mark in Bradenton, Saint John OCF in Gainesville, Saint Philip in Tampa, Saint Raphael in Inverness. Father Peter truly supported a vision of Orthodox brotherhood and cooperation among the clergy in the Tampa Bay Area with his faithful participation in the Tampa Bay Orthodox Clergy Brotherhood since its inception. After his retirement in 2008, Father Peter became integrally involved in parish life at Saint George Serbian Orthodox Church, Clearwater, FL, where he shared his talents as choir director, as well as at Saint Mark Church in Bradenton. In 2013 Father Peter celebrated the baptism of his grandson, Jayson, who brought such great joy to his life.

Father Peter’s health began to decline shortly after the repose of Matushka Sonja in March of this year. Despite his failing health, Father Peter maintained his missionary spirit offering his encouragement and inspiration to the newest mission of the OCA Diocese of the South, Saints Joachim & Anna in The Villages. He was present for the first Divine Liturgy in June and sang with the choir as he was able up until his repose.

Father Peter will be remembered for his humor, his love of church music, his family and love of Christ and service to His Holy Church.

The family requests that any donations in memory of Father Peter be directed to Saints Joachim and Anna Orthodox Church, The Villages, FL.

May Father Peter’s memory be eternal!