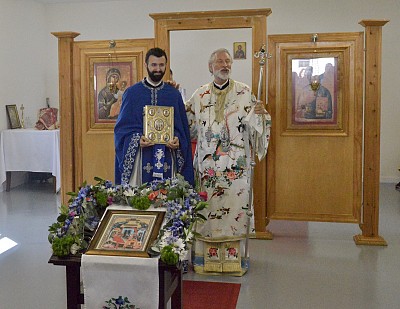 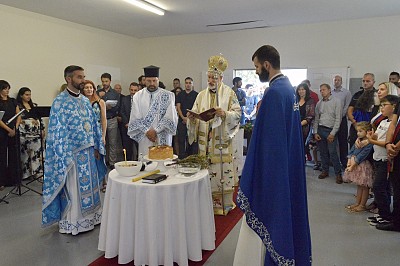 On Sunday, September 19, 2021, the day when we celebrate the memory of the Мiracle of the Holy Archangel Michael, Holy Martyr Romulus and 11,000 soldiers with him, Holy Martyr Eudoxius and the Venerable David, the missionary parish of the Nativity of the Most Holy Theotokos in Richmond celebrated its Feast Day - Slava with a solemn celebration. This day, blessed by the Lord, began with the Hierarchical Divine Liturgy, which was presided over by His Grace Bishop Irinej of Eastern America, with the concelebration of Very Rev. Protopresbyter-Stavrophor Boris Colovic ,Rev. Presbyter Djordje Tomic, Protodeacon Jovan Anicic, and with the prayerful solidarity of the Rev. Presbyter Milisa Petronijevic. The newly formed church choir under the direction of Biljana Soldo, an opera singer, rendered the liturgical responses.

After the reading of the Holy Gospel, His Grace addressed the faithful, speaking about the cornerstone that represents Christ who is the foundation for the construction of the holy temple and every spiritual community. Recalling the parable of the vineyard and the vinedressers of the Gospel, His Grace stated that this encounter speaks of our human relationship with God. Just as the owner of the vineyard sent his son to gather the fruit of the vine and just as the vinedressers killed him, in the same manner, the Lord sent his only begotten Son, our Lord Jesus Christ, to save the human race from sin and grant it eternal life. As the people of that time did not understand the will of God and, just like the vinedressers from the parable, they killed the Son of God and crucified Him on the Cross. However, through this act the Lord gave His life so that the whole world would have life. His Grace emphasized that this new life was given to every member of the parish, to those who went through many hardships and difficulties in the past. However, with Christ as the cornerstone in their life, with the Church and their faith, they now have a new beginning and a new life that leads to salvation.

After the sermon, His Grace presented the Holy Gospel to the Rev. Presbyter Djordje, thus liturgically inaugurating him as the parish priest. His Grace emphasized that by this act, Father Djordje, who is among the youngest in the parish, becomes the oldest, because by presenting him with the Holy Gospel, he received another two thousand years of his life and became the spiritual father of this community.

Following the Prayer behind the Ambo, His Grace blessed the parish chapel, followed by the blessing of the Slava gifts of the Festal Bread – Slavski kolach and Wheat – Koljivo, which were prepared by the Hosts - Kumovi of the ChurchSlava, the Jokic family.

After the Hierarchical Divine Liturgy, an agape meal followed, which was prepared by the diligent members of the Circle of Serbian Sisters.

In the end, we have to thank the Lord, the Most Holy Mother of God, the Protectress of our parish, and His Grace for his visit and paternal love, which will be an inspiration for every member of this community for their spiritual progress and growth towards the Lord to Whom shall be glory forever. Amen. 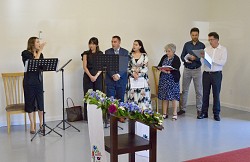