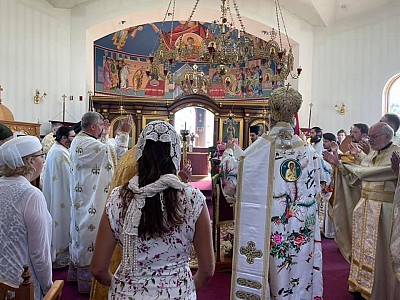 On Monday, July 26, 2021, the New Marcha Monastery in Richfield, Ohio commemorated its Heavenly Patron, the Holy Archangel Gabriel. The celebration of the Festal Hierarchical Divine Liturgy was officiated by His Grace Bishop Irinej of Eastern America. Concelebrating with His Grace were numerous clergy and deacons from the Cleveland and Pittsburgh Deaneries of the Diocese of Eastern America, as well as other Orthodox jurisdictions, which also reflected the substantial gathering of faithful. Responses were harmoniously rendered by the monastery choir, under the capable direction of professor Dr. Nikola Resanovich.

During his deeply inspired homily, which visibly moved those gathered to hear the Word of God, Bishop Irinej spoke of the omnipresence of angles in our lives. Archangel Gabriel (Jibrail), whose name means “the strength of God”, in particular, is the messenger of Glad Tidings, sent by the Lord Most High.

As the Gospel lection of the day speaks of the mission of Christ’s Disciples of the Seventy, the Bishop expounded on Christ’s own apostolic admonition, which consisted of healing the sick and preaching the Kingdom of God. This is a summons to the restoration and transfiguration of the world, which God created. In order to accomplish this, we must begin, noted Bishop Irinej, by entering into the homes and lives of persons with peace. This must be our only key to the doors of their homes and hearts, for Christ is our Peace Incarnate and we enter in His Name. As such, we ourselves become messengers of Glad Tidings. 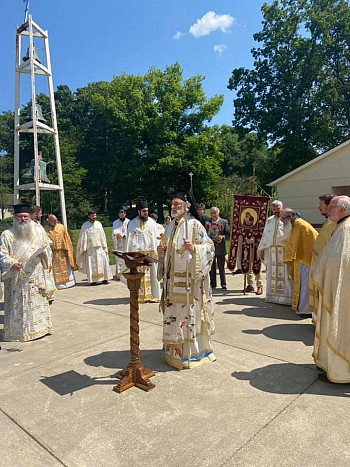 During the Rite of the Patronal Feast, with the processional reading of the Gospels and blessing of the walls of the temple, the grave of the reposed abbess, Mother Ana (Radetic) was also blessed. As this year commemorates the 20th Anniversary of the consecration of the monastery church at the hands of Patriarch Pavle (July 28, 2001-2021), a wreath of flowers was laid before the monument of Bishop Sava of Shumadija, founder of the monastery in 1975 (originally purchased in 1969 as a Diocesan Center).

This year’s gracious host for the Monastery Slava was Michael Simic, together with his family. Following the Rite of Blessing of the Wheat and Festal Bread, the Slava was received by Dobrana Komnenic for the following year.

Under the watchful eye of Sister Anastasia (Gousios), tents were pitched and tables set for the bountiful Agape Feast, prepared according to monastic precepts, which followed on the sprawling grounds of the monastery estate. Most everyone stayed, well into late afternoon, enjoying the prayerful tranquility of the rural wooded setting.

During the program which followed the meal, a special presentation was made by Paul Finley, Director of St. Herman’s House of Hospitality- FOCUS Cleveland. Among all else, he spoke about their new beekeeping project, which now boasts of 60 beehives, scattered throughout the Greater Cleveland area, including New Marcha Monastery.

Those interested in purchasing organic wildflower honey and, in so doing, supporting both the Monastery and St. Herman’s House, a beloved ministry of the Orthodox Christian faithful in Cleveland, should contact Sr. Anastasia at New Marcha Monastery. 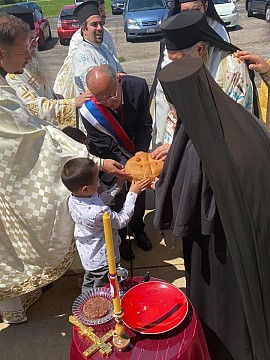