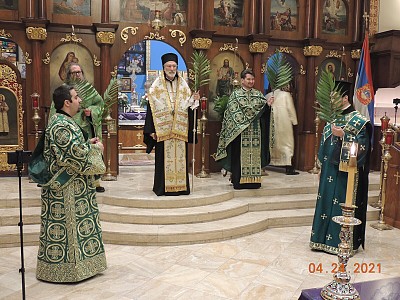 The parish of the Holy Prophet Elijah in Aliquippa, Pennsylvania festively celebrated Lazareva Subota – Lazarus Saturday – with an unforgettable combination of blessed events.  Of particular significance was the visit of our beloved archpastor and father, His Grace, Bishop Irinej of our God-Protected Diocese of Eastern America, who was joining our faithful for the first time since the pandemic began.  His Grace’s joy and enthusiasm would shape a day that will long be remembered by parishioners and friends of our community.

The Divine Liturgy began with the tonsure of two young men to the rank of Reader, the first level of ordination in the Orthodox faith.  Cousins Luka Kosanovich and Marko Kosanovich were called forward by His Grace and through the laying on of His Grace’s hands, by the power of the Holy Spirit, were set apart to serve the Holy Orthodox Church as acolytes and readers of Divine Scripture.  His Grace explained the significance of this tonsure and advised our new Readers of their responsibilities as leaders within the church community as servants of the Church.  The tonsures were affirmed, individually, by all present with the exclamation of “AXIOS” – “HE IS WORTHY!” – an exclamation that would continue later in the service.

Following these tonsures, His Grace called forth Reader Daniel August for elevation to the rank of Subdeacon.  After vesting Daniel with the orarion around the waist, His Grace directed him to stand before the Iconostas, where he would await the next step of his journey toward the diaconal ministry that would come later in the Liturgy.

The Hierarchical Divine Liturgy then continued, as faithful filled the church to its pandemic-reduced capacity. Responses were sung in glorious fashion by members of the St. Elijah Serbian Church Choir, led by George Milosh.  As the pandemic had limited the choir’s availability to sing for Divine Services for much of the past year, the sounds of their musical offerings to God were very welcome to all present.  To many in the church and to those joining via livestream, the nine voices who were singing sounded more like a choir of 100.

Following the reading of the Holy Gospel by Protodeacon Milos, His Grace gave an inspiring homily on the Lord’s raising of His friend Lazarus from the dead.  His Grace focused on the extraordinary revelation contained in the shortest sentence found in all the Gospel – “Jesus wept.” – which was part of the day’s reading.  These two words, His Grace explained, fully reflected Christ’s two natures as both the Son of God and, as He often referred to Himself, the Son of Man.  The Son of God, the Creator of all things, wept over the decay of His creation, man who was formed in His Likeness and Image and who was not intended for death; and the Son of Man wept over the loss of His beloved friend, just as any of us would do in a similar situation.  And after He wept, His Grace continued, the Lord fulfilled all of the things He foreshadowed in the Gospels of the Sundays of Lent by calling forth Lazarus from the tomb, confirming exactly what He told Lazarus’s sister Martha:  that He is the Light and the Resurrection!  It is with this assurance that we all are called to enter into Jerusalem with our Lord, and to face His trial and crucifixion with Him so that we can experience resurrection with Him on the third day.

Following the consecration of the Holy Gifts, the time arrived for the ordination of Subdeacon Daniel August to the holy Diaconate.  The Subdeacon was led to the altar by Protodeacon Milos and Deacon Milan, and when His Grace asked what he was seeking, Subdeacon Daniel read a moving statement that recounted his lifetime of activity in the St. Elijah parish.  He lovingly recalled his two role models in the faith – his grandfather, +Daniel Menich, a longtime altar server and Tutor at St. Elijah, and the ever-memorable +Prota Stevan Stepanov, Subdeacon Daniel’s beloved spiritual father from his birth.  He also made special note of the support of his wife Ashley, explaining that while his grandfather and Prota Stevan planted the seeds of faith and service within him, his wife nutured those seeds by encouraging his pursuit of ordination.  With that, the rite of ordination began, with His Grace reading several prayers and laying his hands on Subdeacon Daniel through which the Holy Spirit accomplished the blessed event.   Finally, His Grace asked that all the faithful confirm the ordination with the declaration of “AXIOS” – “DOSTOJAN” – “HE IS WORTHY!”  The thunderous response reflected the parish’s love and appreciation for the new deacon and his devotion to the St. Elijah community.

The Divine Liturgy continued with the first acts of Deacon Daniel’s liturgical service, including the presentation of the Holy Gifts for the Communion of the faithful.  Many children and adults approached and received the Body and Blood of our Lord from His Grace.

Upon completion of the Divine Liturgy, His Grace began the service of baptism and chrismation of Bogdan Golic, the youngest child of Father Branislav and Popadija Dragana.  Honored Kum for the occasion was Vuk Cvetkovic-Lazic, assisted by his young son Luka as candle-holder.  Many other guests and friends arrived in time for the baptism, including V. Rev. Stavrofor Rajko Kosic, parish priest of Holy Resurrection Serbian Orthodox Church in Steubenville, Ohio, and Rev. Dejan Barac, parish priest of St. George Serbian Orthodox Church in Midland, Pennsylvania.  Throughout the service, His Grace offered explanations of various aspects of baptism and chrismation to the many faithful and guests that had gathered to welcome Bogdan into the faith.  The baptismal service culminated in the immersion of Bogdan into the blessed water, followed by the procession around the tetrapod, in which His Grace invited all of the children present to join.

After a mid-afternoon break, many faithful returned to the temple of the Holy Prophet Elijah at 5:30 PM for the celebration of Vrbica – the vespers of Palm Sunday.  Serving with His Grace were Father Branislav, Father Rodney, Protodeacon Milos, and Deacon Daniel.  The vesper service began with the traditional litija (procession) around the church, with adults and children joining in the singing the Troparion of Palm Sunday and bearing the “palms of victory”, branches of palm and willow trees.  During the service, His Grace led the faithful in many of the prayers, and members of the St. Elijah choir again offered inspiring responses.  The highlight of the evening’s service, however, came at the end, when His Grace called all of the children present to the center of the church for a lesson from “Deda Vladika” about the icon of Palm Sunday and the significance of the feast.  The assembled children – many of whom were well under 10 years of age – were exceptionally engaged with their archpastor and teacher, responding enthusiastically to his questions and eagerly sharing with him their knowledge.  At the end of the lesson, Deda Vladika commended the children and gave them an “A+” for their effort!

The faithful of all ages of the parish of the Holy Prophet Elijah truly enjoyed a feast day filled with blessings from God and from their archpastor and father, Bishop Irinej.  Eis pola eti Despota!