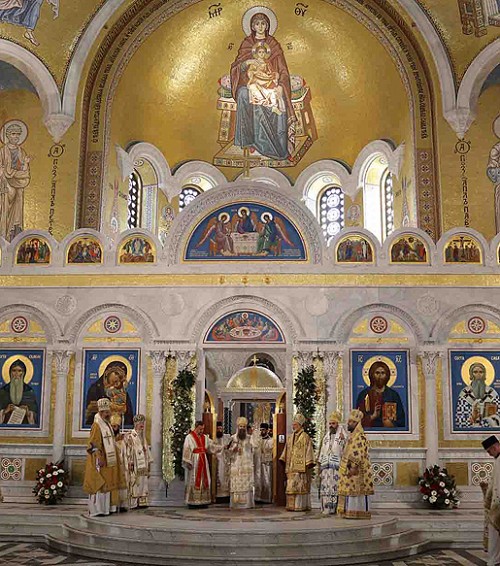 On February 21, 2021, on the Sunday of the Publican and the Pharisee, His Holiness Porfirije, Serbian Patriarch, officiated the Divine Liturgy in Saint Sava Memorial Cathedral in the district of Vracar, Belgrade.

Their Graces Bishops: Irinej of Eastern America, Jovan of Slavonia, Nikodim of Dalmatia, Heruvim of Osek-Polje and Baranja; Stefan of Remesiana and Isihije of Mohács, together with priests from several dioceses of the Serbian Orthodox Church concelebrated. All choirs of the Choral Society of the Cathedral of Saint Sava sang responses: Children's Choir Rastko (conductor Milena Antovic), choir Mokranjac and the choir of the Cathedral of Saint Sava (conductor Katarina Stankovic).

After the Gospel parable had been read, His Holiness Porfirije, Serbian Patriarch, among other things, said: -What seems to be great to people of the world,  powerful and strong, seems weak in God’s eyes. What the world considers to be wise, deep and smart, for God is madness and a ringing bell, and that clang is nothing but an echo of emptiness. But, the Lord is revealed in our faith and humility. Everyone who has faith as the foundation of his repentance, the Lord makes the most powerful, makes him the ruler of the world. Today's Gospel story, which is one of the links leading to the preparation of fasting, reveals just that. It reveals the paradox of the law of God and the paradox of the criteria of God's relationship to this world.

- The eye of God values man differently - he values him by his heart. It is important that we obey the laws, forgive and ask for forgiveness. Without that, we are not only Christians, but it can be said that we are not humans either. To be Christian means to be authentically human. Everything that the publican did, and more than that, we should do, because that is how we function soberly. We do everything to gain peace and joy by saying, "I am only an unworthy servant of God." If we do not do that, we will be filled with anger and hysteria, the feat will be difficult for us - it will be pride and vanity. That burden, if not expelled from the heart, leads to a demonized state. It may be too strong a word, but it really is so. The greater the pride and vanity, the more closed we are, the more lonely we are, the poorer we are, -  Patriarch Porfirije stressed and asked those present to remember his name in prayers, because, as he said: I know deeply what a kind is a position to which the Lord appointed me with love and grace.

Serbian Patriarch Porfirije called upon the faithful in these times of difficult epidemiological conditions to adhere to the prescribed measures and take care of themselves and of their neighbors, as well as to be obedient to their Church.

After the Holy Liturgy, His Holiness Porfirije served the memorial service to Patriarch Irinej of blessed repose in the crypt of the Memorial Cathedral.