THE SYNAXIS OF ST. JOHN THE BAPTIST 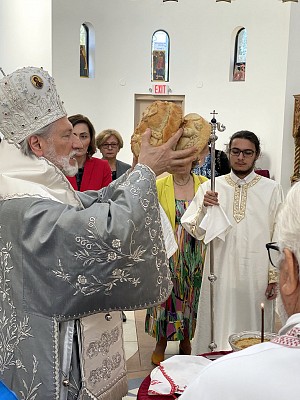 The final day of the canonical visitation of His Grace Bishop Irinej of Eastern America to the St. Petersburg Deanery for the Epiphany cycle of services was on Wednesday, January 20, 2021 for the Synaxis of St. John the Glorious Prophet, Forerunner and Baptist of the Lord.

The Hierarchical Divine Liturgy was celebrated in the new Church of St. Sava in North Port, Florida. His Grace was joined in concelebration by Protopresbyter-Stavrophor Uros Ocokoljich from Naples, host priest Presbyter Aleksandar Sasa Djurdjevic, and Protodeacon Milos Zdralic. Prayerfully present was Protopresbyter Milan Jovanovic of the St. George Church in Clearwater.

Elaborating on the unique person and ministry of St. John the Baptist, Bishop Irinej in his homily, addressed the numerous faithful that had gathered, by explaining how he was the last of the Old Testament prophets, and the only one to have seen Him of whom he spoke. In like manner, he was the first of the New Testament disciples, who prepared the way of the Lord and bore witness to the Holy Trinity at the Baptism of Christ.

St. John is also referred to the as greatest among those born of women (cf., Matt. 11:11). Iconically, he is often depicted as an “Angel in the flesh”, given that he is considered the prototype of Orthodox monasticism, summoning all to repentance “for the kingdom of heaven is at hand!” (John 3:1).

Adding to the joy of the Feast was the liturgical celebration of the Rite of the Patronal Feast, Крсна слава, for Fr. Sasa and his family, along with a number of his parishioners. A festal agape meal followed in the spacious social center for the faithful from the North Port and Naples area, as well as other locations in Florida. 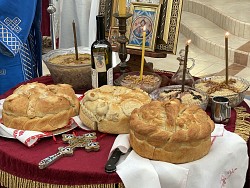