THE GREAT FEAST OF THE EPIPHANY OF OUR LORD 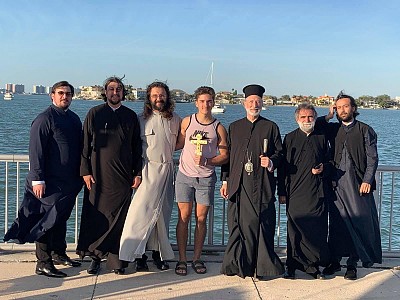 In sunny but cool Florida, the clergy and faithful of the St. Petersburg Deanery were pleased to invite and host their Diocesan Hierarch, His Grace Bishop Irinej of Eastern America, for the Epiphany cycle of services.

The culmination of the four-day celebration was the Great Feast of Epiphany itself, which was celebrated in the Church of St. George in Clearwater. His Grace was joined in concelebration of the Festal Divine Liturgy by Protopresbyter-Stavrophor Radivoje Panic of Belgrade’s St. Sava Temple, Presbyter Dragan Zaric of St. Sava Church in St. Petersburg, together with his parishioners, and Protodeacon Milos Zdralic. Prayerfully present was host priest, Protopresbyter Milan Jovanovic.

To add to the joy of the Feast and the delight of their parents and all those gathered, at the recommendation of their parish priest, Fr. Milan Jovanovic, three dedicated altar servers, Georgije Jovanovic, Mihajlo Poljcic, and Mihajlo Bunijevac were set apart as readers of the Church of Saint George.

Bishop Irinej enlightened the numerous faithful that had gathered by explaining during his homily, how Theophany is an encounter of Christ and water, the primary substance of life, which He created. By stepping into the River Jordan to received Baptism at the hands of St. John the Baptist, Christ’s own purity restored the waters to their pristine nature as the very waters which flowed in the Garden of Eden.

The same was made manifest during the Great Blessing of Water, which was celebrated in continuation of the Liturgy outside in front of the church.

Later that afternoon, at Sand Key Park in Clearwater, joined by Protopresbyter Ljubisa Brnjos of Orlando and Presbyter Aleksandar Sasa Djurdjevic, many gathered to participate in the Blessing of the waters of the bay at the hands of Bishop Irinej and swim for the cross. The swimmers were divided into two groups, children and young adults, with each group competing to retrieve the cross and bring blessings to their families and their community. The cross was retrieved by Filip Bjelotomic of the younger group, and Aleksej Brnjos of the older group.

The Feast of Epiphany 2021 was truly a joyous encounter of the clergy and faithful of the St. Petersburg, Clearwater, North Port, and Orlando parishes with their Archpastor and father in God. 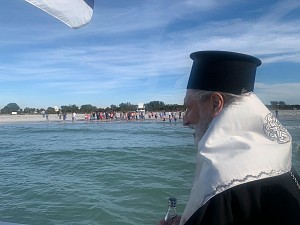