THEOPHANY EVE - THE FEAST OF THE HOLY CROSS 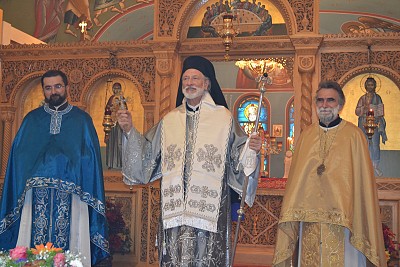 On the Eve of the Great Feast of Theophany, January 18, 2021, His Grace Bishop Irinej of Eastern America celebrated the Vesperal Divine Liturgy of St. Basil the Great in the St. Sava  Church in St. Petersburg, Florida. Concelebrating with His Grace were Protopresbyter-Stavrophor Radivoje Panic of Belgrade’s St. Sava Temple, host priest Presbyter Dragan Zaric, and Protodeacon Milos Zdralic. Prayerfully present was Protopresbyter Milan Jovanovic of the neighboring St. George Parish, together with his parishioners.

During his homily, Bishop Irinej elaborated on why in our unique Serbian tradition, the Eve of Theophany is known as the Feast of the Holy Cross and includes, as on Epiphany itself, the Great Blessing of Water. The word baptism is Serbian, крштење, is derived from the word, крст, cross. When someone is baptized they are referred to as a “cross”, given that we are all summoned in Christ-likeness to bear our cross.

Thereafter, among his seven last words from the cross upon which Christ was crucified for us and our salvation, He said, “I thirst” (John 19:28), as He thirsts after life itself, the life which He created for eternity, and not death. Such thirst can only be quenched with “living water” (cf., John 4:10), which flows from the hearts of those who believe in Him (cf., John 7:38).

It was a joyous encounter of the clergy and faithful of the St. Petersburg and Clearwater parishes with their Archpastor and father in God at the time of Epiphany. Truly, God is revealed! 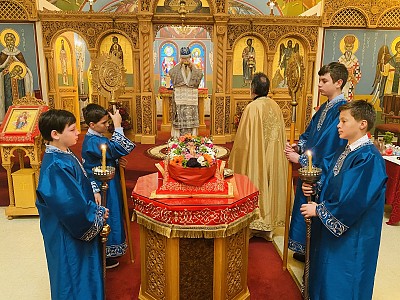