THE SUNDAY OF THE HOLY FATHERS IN ELIZABETH 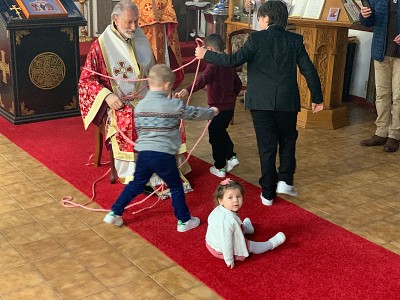 On Sunday, January 3rd, 2021, His Grace Bishop Irinej celebrated the Hierarchical Divine Liturgy in the Church of the Holy Ascension in Elizabeth, New Jersey. Concelebrating with the Bishop were Presbyter Lavrentije Soper and Protodeacon Milos Zdralic.

During the homily, His Grace made mention of the nature of today’s celebration being the Sunday before Christmas, the Sunday of the Holy Fathers and, according to our Serbian tradition, Father’s Day.

The bishop offered an in-depth explanation of the Gospel lection on the Genealogy of our Lord Jesus Christ. In order to understand the entire premise of the genealogy, one must turn to the Epistle, which poses the question of the testing of faith. While Abraham was asked to sacrifice his son, through Divine intervention it was not allowed to pass as such. Yet, God the Father sent his only-begotten Son to be incarnate in human flesh, so that he could be sacrificed for the life of the world.

Jesus Christ came from the lineage of Abraham, who was the Father of all nations, so that he could become, in the words of our Holy Bishop Nicholai, “The All-Man”, embracing in His incarnation the entirety of humankind. He was of the royal lineage of David the King, and of the priestly heritage of Zadok the Priest. As such, He was crucified as “King of the Jews”, and as priest became both the Offerer and the Offered.

Of particular interest, the Bishop noted, was the fact that this genealogy was atypical for its day and tradition, as four women were entered into it, three by name and a fourth by reference. Ruth, who was not of the Hebrew people, and the wife of Uriah, who is not mentioned by name, show that Christ’s humanity was truly all embracing.

Following the Liturgy, Bishop Irinej called forward the children and questioned them on the tradition of Serbian Father’s Day. As was expected, the children promptly tied the bishop to a chair, so that he could gift them in exchange for his release. Indeed, he presented the children and everyone with festal candy canes.

A wonderful day, filled with happiness and fellowship in Christ, led by our Bishop and father, imbued in everyone the joyous anticipation of the Nativity of Christ! 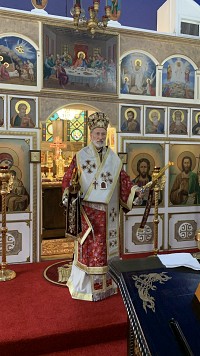