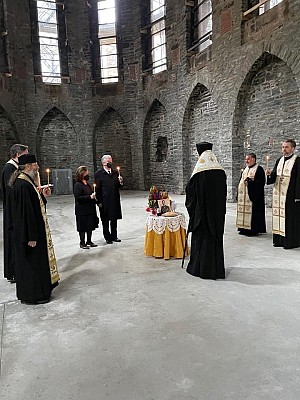 On the occasion of the 50th anniversary of the passing of His Majesty King Peter II of Yugoslavia, a memorial service for the late King was officiated by His Grace Bishop Irinej of Eastern America in the presence of Their Royal Highnesses Crown Prince Alexander and Crown Princess Katherine, who lit candles in memory of the Crown Prince’s father, at the Serbian Orthodox Cathedral of Saint Sava in New York City.

His Majesty The King was very close to the Cathedral community and particularly fond of the grand and magnificent edifice during his time in the United States. The Royal Family frequently worshipped in the Cathedral, which is now being rebuilt following the tragic fire of Easter Sunday, 2006. His Royal Highness, The Crown Prince, is the Royal Patron of the rebuilding of the Cathedral.

In his remarks, Bishop Irinej spoke of his own recollections of the news of King Peter’s passing and how the Serbian community in the United States was tremendously shaken. His Majesty was a rare Monarch who shared in the plight of his people, as such his life was one with his subjects. For many, continued the Bishop, hope would have died with the King, had it not been for the Crown Prince in whom they saw hope for their future.

His Royal Highness, in thanking His Grace for his words and the clergy present, spoke from the heart of his father’s difficulties and sacrifices in life, which was in so many ways was a tragic life. Yet now, he rests in his country, with his ancestors, family and fellow countrymen. His dream of returning home was finally fulfilled.

King Peter II of Yugoslavia was born in Belgrade 6 September 1923 as the first born son of King Alexander I and Queen Maria of Yugoslavia. His Godparents were King George VI and Queen Elizabeth (later Queen Mother of Great Britain).

King Peter II was nearly killed when the Palace was bombed during the night by the Nazis. The Second World War forced King Peter II to leave the country along with the Yugoslav Government – initially to Greece, Palestine and then to Egypt.

King Peter II then joined other monarchs and leaders of German occupied Europe in London in June 1941. There King Peter was regarded by the people of Yugoslavia as the symbol of resistance against Nazism.

King Peter II never abdicated. After the Second World War King Peter II lived in exile, initially in London, with his wife Queen Alexandra of Yugoslavia (previously Princess of Greece and Denmark) and their son Crown Prince Alexander who was born in 1945. He spent the last years of his life in America.

Following a long and grave illness, King Peter II died 3 November 1970 in Denver Hospital Colorado, and he was buried at the St. Sava Monastery Church in Libertyville Illinois. He was the only king buried in the United States. The King’s remains were transferred to the Royal Family Mausoleum of St. George in Oplenac 26 May 2013 with the full honors of a State Funeral befitting his royal rank and dignity. 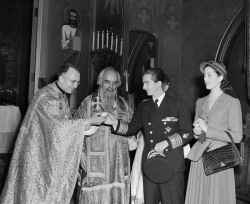