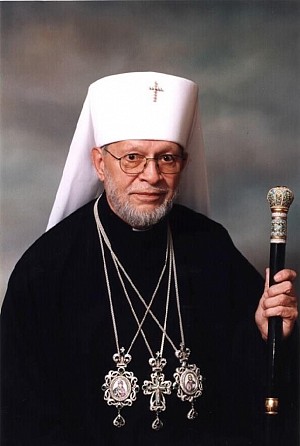 "During his entire life", noted Bishop Longin, "Metropolitan Theodosius was a most dedicated servant of the Church, offering up himself to his people from his youth, following in the footsteps of his heavenly protector, St. Theodoisus of Chernigov. He worked diligently towards the good of the faithful and church order in North America, sparing no effort in keeping unity and harmony among all Orthodox jurisdictions."

Metropolitan Theodosius was known to have been more than a friend to the Serbian people and Church, having had strong relationships with its hierarchy, as well as encouraging Serbian students of theology who studied in the seminaries of the Orthodox Church in America. His Grace emphasized how, "we are still thankful to His Beatitude for his appeals in defending the Serbian people during the NATO bombings of Serbia in 1999. His requests to the President of the United States, along with his prayers, helped bring an end to the bombing of already war-torn Serbia."
As we continue to pray for his blessed repose, may our good Lord commit his soul to where the just repose.