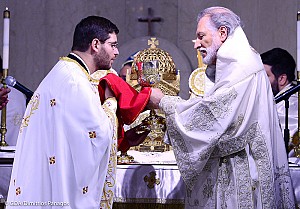 On Saturday, August 8th, 2020, His Grace Bishop Irinej of the Serbian Orthodox Diocese of Eastern America, at the gracious invitation of His Eminence Archbishop Elpidophoros of the Greek Orthodox Archdiocese of America, concelebrated in the Holy Hierarchical Liturgy at the Greek Orthodox Cathedral of the Holy Trinity in New York City. His Grace was joined by Protodeacon Milos Zdralic.

During the course of the Divine Liturgy, His Eminence ordained his Archdeacon Eleftherios Constantine to the Holy Priesthood. Toward the conclusion of the Liturgy, the Archbishop bestowed upon the new presbyter's father, the Reverend Thomas Constantine, with the blessing of His Eminence Metropolitan Savas of Pittsburgh, the latter's diocesan hierarch, the dignity of Stavrophoros i.e., of wearing a pectoral cross.

His Eminence Archbishop Demetrios, formerly of America, joined in prayerful presence at the Holy Liturgy of Ordination for his former Deacon Eleftherios. 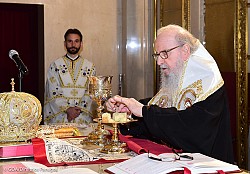