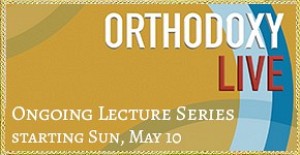 To introduce the theological heritage of the Orthodox Church and to nurture its dialogue with contemporary society, Orthodoxy Live features speakers with engaging pastoral titles making themselves accessible to the public opinion. Together with our Bishop and Father Irinej, the speakers to date have been clergymen of the Eastern American Diocese. In addition, lay people who selflessly gave their talents to the Church also took part in the lectures.

Starting September 2020, the program will be expanded to include presentations in Serbian as well. In addition, we intend to expand the list of speakers outside the Serbian Eastern American Diocese.

During lectures, listeners are encouraged to actively participate and ask questions. Orthodoxy Live's editorial policy does not allow posting of inappropriate comments.

This project was made possible by the Reverend Bishop Irinej, who supported our diocesan web diaconia to all the faithful of the Serbian Eastern American Diocese and to people who are thirsty for the Word of God. We express gratitude to all previous lecturers who with their participation gave strong support of this pioneering project for our Diocese.