By appointment of Her Majesty Elizabeth II, Queen of Great Britain, the former St. Vladimir’s Seminary Dean from 2007 to 2017, and Fr. Georges Florovsky Distinguished Professor of Patristics, prolific author and acclaimed speaker, has accepted the position of Regius Professor of Humanity at the ancient University of Aberdeen.

Founded in 1495, the University of Aberdeen is Scotland's third oldest university and the fifth oldest in the United Kingdom. This prestigious University is ranked in the top 30 universities in the UK and voted Scottish University of the Year 2019. Globally, Aberdeen is numbered among the top 170 universities in the world. Its community consists of more than 130 nationalities, with 15,000 students. There, as part of his duties Fr. John will be directing doctoral students in the study of theology.

The esteemed professor and patristics scholar, after completing his first degree in Philosophy in London in 1987, spent a year studying in Greece. He finished an MPhil in Eastern Christian Studies at Oxford University, under His Eminence Metropolitan Kallistos (Ware), who subsequently supervised his doctoral work, which was examined by Fr. Andrew Louth and His Grace Rowan Williams, the former Archbishop of Canterbury. Fr. John also holds the Metropolitan Kallistos Chair of Orthodox Theology at the Vrije Universiteit of Amsterdam and the Amsterdam Center for Orthodox Theology.

One of the most enduring contributions of Fr. John Behr to contemporary Orthodox thought, according to Bishop Irinej of Eastern America, lies in the discipline of the theology of the person. “Here we can clearly see how Behr, himself a decedent of Russian and German clerical and intellectual elite, follows suit in the development of theological anthropology.” His Grace traces what he calls the ‘twin legacies’ of St. Vladimir’s Seminary, beginning with Fr. Georges Florovsky and his ‘Neo-Patristic Synthesis’, through Fr. Alexander Schmemann and his development of Liturgical Theology.” According to the Bishop, “Behr subsequently adds a new dimension through Christology to the theology of the person. The same is articulated in his book, Becoming Human: Meditations on Christian Anthropology in Word and Image. As such his contribution culminates an entire era of theological thought, patristic and liturgical, which will serve to inspire generations to come as St. Vladimir’s ‘third legacy’.” Concluding, Bishop Irinej notes, “I am indeed grateful that our students, our new generation of clergy and lay leaders, have had the chance to study under the eminent likes of Fr. John Behr.”

“I was blessed to have studied under one of the greatest theological minds of our age”, recalls Fr. Christopher Rocknage (’07 MDiv). “Fr. John Behr is the epitome of a theologian–and I mean that in the ecclesiastical sense. While many others may be described as academic theologians, Fr. John lives his life for a relationship with Christ. He lives to know God and Jesus Christ, Whom He has sent. St. Vladimir's been blessed with a dean that had such a clear and beautiful vision for the school,” notes Fr Christopher. “I hope to be able to continue to call Fr. John—not just a mentor—but a friend.”

“During my seminary formation,” notes Fr Aleksa Pavichevich (’08 MDiv), “I was blessed to be a student in Fr. John Behr’s patristics courses at St. Vladimir’s Seminary.  Every class he taught, it felt as though the depth and beauty of our Orthodox Christian faith was revealed to us as we journeyed together through the Fathers of the church. The entire room seemed to lean forward as one, attentive, as Fr. John began to speak, all of us eager to hear the challenging words that came forth from his mouth like some sweet nectar. I will forever be thankful for those experiences–and, I pray that the Lord God grant Fr. John many years of continued theological study and teaching–because Fr. John, no doubt, has much more to offer the Christian world!”

“It was only after I graduated from SVS that I fully realized how blessed I was to have had Fr. Behr as my professor”, recalls Fr. Branislav Golic (’11 MA). “To this very day, whenever I mention that I am an SVS graduate in my conversations, it is immediately associated with Fr. Behr’s excellence in academia, theology and, especially, patristics. Today, I am proud to say that I attended St Vladimir’s Seminary during Fr. Behr’s tenure.”

"When it comes to academics, I must say that he taught me how to think and approach patristic texts,” stated Fr. Stefan Djoric (‘18 MA & ’19 MTh). “In that sense, just to be around him was a privilege! To pick his theological mind as much as possible and to form myself theologically under his guidance was indeed a priceless experience!"

Fr. Djordje Tomic (‘19 MA) stated, “during my studies at St. Vladimir’s Orthodox Theological Seminary, “I was honored to attend patristic classes of Fr. John Behr. His systematic and profound approach to the texts of Church Fathers, combined with excellent teaching methods, enhanced my understanding of the theological writings. He taught me that it is crucial to have excellent knowledge of the historical context and the texts' language for a proper comprehension of them. Hence, I am very grateful to Fr. John Behr, for guiding me on my academic journey.”

Also a recent graduate of St. Vladimir's Seminary, Fr. Lavrentije Soper ('19 MDiv) recalls, “I am one of the last who would have the privilege of being a seminarian for an entire three years with Fr. John Behr as a Dean and Professor. While Fr. John is a well-respected and recognized theologian, I had several opportunities to see and witness the humble pastoral side he showed the seminarians and their families. He was just as powerful as a listener as he is a lecturer and that is something that I learned from him and try to aspire to in my own life. He will be missed at St. Vladimir's.”

Finally, as professor and mentor, when questioned as to what Fr. John, himself, seeks for his students, he replies, “a willingness to engage with ways of thinking that might be different. We talk so much about the fathers, but we tend to choose the quotes we like,” he said. “But I want to impart to them an encounter with the fathers on the fathers’ terms by actually reading their texts and trying to understand what they are saying.” An as a true and caring pastor, one who lives and breathes that which he exuberantly and convincingly teaches, Fr. John adds, quite simply, “a love of Christ and an encounter with Christ through the study of theology.”

From all of us and so many more, we thank God for your teaching and presence in our midst, as we do thank you, Fr. John, prayerfully asking that the Lord grant you many, many more years of productive work and fruitful ministry in the Lord’s service. 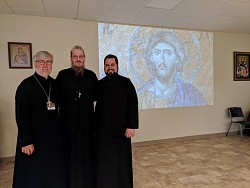 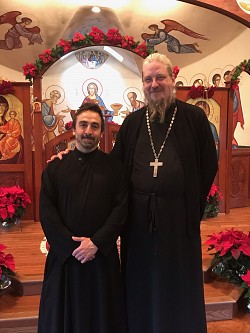