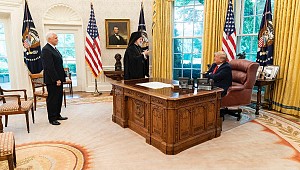 New York, NY – Today, His Eminence Archbishop Elpidophoros met with President Trump and Vice President Mike Pence at the White House on the concerns of the Ecumenical Patriarchate and the Greek Orthodox Archdiocese over the seizure and re-conversion of the Hagia Sophia into a mosque.

Following the meeting with the President and Vice President, the Archbishop stated:

“I am grateful to have met with President Trump and Vice President Pence in the White House and communicated our grave dismay at the re-conversion of Hagia Sophia into a mosque, as well as ongoing security concerns for the Ecumenical Patriarchate and issues of religious liberty. In view of tomorrow’s day of mourning, we persevere in prayer but also bring our struggle to the highest levels of government for action and consideration.”