BEHIND MONTENEGRO’S 2019 LAW ON RELIGIOUS FREEDOM AND INSTITUTIONS 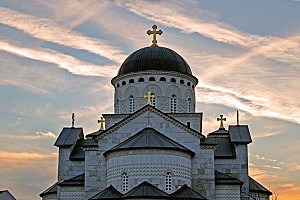 The main subject of the Montenegrin law is ownership of religious property. Although every single article of the law has legal deficiencies, the most significant problems are presented in Articles 62 and 63. These two articles state that three categories of property and land owned by religious communities—1) those built with public revenue, 2) those owned by “Montenegro” prior to 1918, and 3) those built with joint investment of citizens—no longer belong to the religious communities themselves but are now considered to be “cultural heritage” of Montenegro and are, therefore, to be owned by the state.

The Montenegrin law on religion has major flaws according to any objective legal analysis. The law provides for unconstitutional expropriation of property and land owned by religious communities. Since the Serbian Orthodox Church is the historic religion of a great majority of the citizens of Montenegro, it is most affected by the law. In addition, the law has unconstitutional retroactivity in application and provides for the unconstitutional de-secularization of Montenegro. The law violates Montenegro’s constitutional principle of separation of the church and the state. In legal practice, it lacks provisions for dealing with the legal concepts of burden of proof and legal procedure/due process and deprives any aggrieved parties (in this case, the Serbian Orthodox Church) of a right to an appeal that is guaranteed by the Constitution. To sum up, this law violates other Montenegrin laws, international instruments, and the Montenegrin Constitution itself.

If applied as it is now, it would seriously damage the Serbian Orthodox Church, Montenegro’s predominate religion. This new law leads to the unconstitutional expropriation and confiscation of vast majority, if not all, of the Church’s property and land in violation of its constitutionally protected rights, without any procedure, and without a constitutionally guaranteed right to an appeal. The lack of “due process” itself should be enough to repeal this law.

Montenegro has a unique history with respect to the State and the Serbian Orthodox Church prior to 1918, which the law ignores. For much of the time prior to 1918 to which the law applies, Montenegro was a host to many different states, such as Duklja (Zeta), was part of the Serbian medieval state, and was even a theocratic state ruled by the Prince-Bishops. Montenegro was not recognized as an independent country until 1878. This means that the law cannot provide that the properties owned by “Montenegro” at any point prior to 1918 now belong to the state since, under the 1905 Montenegrin Constitution, the church is already recognized as the owner thereof.