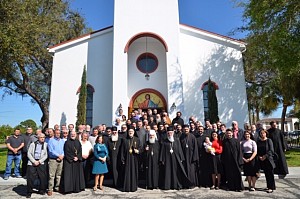 IN THE NAME OF THE HOLY AND LIFEGIVING TRINITY!

Today, as we celebrate the memory of Saint Onesimus, Apostle of the Seventy, and Venerable Paphnutius the Recluse of the Kiev Caves, the Holy Spirit has gathered us in the community of the Body of Christ that He might bring us closer to our Heavenly Father. Having announced the fullness of God’s Church, gathered around our Bishop, Father and Archpastor Irinej, we greet the fullness of the Serbian Orthodox Church in the person of His Holiness, the Archbishop of Pec, Metropolitan of Belgrade-Karlovac, and Serbian Patriarch Irinej and his Delegation.

We also greet the members of the Episcopal Council of the Serbian Orthodox Church in North, Central and South America, as well as the members of the Central Church Council of the Serbian Orthodox Dioceses in the United States of America, Canada, and Central and South America. From this place we greet His Royal Highness, Crown Prince Alexander, Heir to the Throne, and his wife, Her Royal Highness Princess Katherine.

We express our steadfast support for His Grace our Bishop Irinej, the Diocesan Council and the Diocesan Executive Board of the Serbian Orthodox Diocese of Eastern America, as well as the leadership of our Holy Church in our Serbian Fatherland, in the Region, and in the Diaspora, and to all persons of good will.

THEREFORE, LET IT BE RESOLVED that in the year 2020 we continue to build on the foundations laid by our first Archbishop and Enlightener of the Serbs, St. Sava, and by our American luminaries, SS. Mardarije and Nicholai, as we live our Holy Orthodox Faith in a new land and bequeath it to our children through that living faith, prayerful worship, and education, both at home and in the parish communities.

WHEREAS the year 2020 marks the 85th Anniversary of the Repose of Mihajlo Idvorsky Pupin (March 12, 1935-2020), Educator, Inventor, Scientist, Svetosavac (Follower of the Way of St. Sava), and Great Benefactor of the Serbian Orthodox Church and People in general, and of St. Sava Monastery in particular, and WHEREAS as honorary Serbian Consul General to the United States, President of the Central Committee of the Serbian National Defense, Professor Dr. Mihajlo Idvorsky Pupin of Columbia University was the founder of the “Serbian Relief Committee,” headquartered at 70 Fifth Avenue in New York and WHEREAS he was greatly assisted in his work by the then Archimandrite Nicholai (Velimirovich) and Helen Losanitch-Frothingham, the appointed Serbian Red Cross delegate to America.

THEREFORE, LET IT BE RESOLVED that, with our brethren who have reaped the benefits and learned from the witness of Mihajlo Pupin, we mark this 85th anniversary of his repose, acknowledging that all glory is due God, with thanksgiving for his God-pleasing work, and with our humble prayers to God for his salvation and eternal memory.

THEREFORE, LET IT BE KNOWN that the newly-consecrated Antimensia now grace the holy altars of the churches, monasteries, and chapels of our God-protected Diocese.

WHEREAS, with regard to our major Diocesan Building Project, the St. Sava Pro-Cathedral in the God-protected city of New York, as we now finish the Secure and Enclosure Phase, and as of February 4, 2020 the stabilization of the Cathedral has been certified.

THEREFORE, LET IT BE RESOLVED that we continue to support, materially and prayerfully, the reconstruction of the St. Sava Pro-Cathedral, seeing the project through to its completion.

WHEREAS the Republic of Montenegro has adopted the “Law on Freedom of Religion or Beliefs and Legal Status of Religious Communities” and WHEREAS this law condones the seizure of church properties, sanctuaries of the Serbian Orthodox Church, especially those erected prior to 1918 and which have no formal documentation of ownership and WHEREAS the government of Montenegro has permitted violent action against peaceful Orthodox protestors who desire to preserve their churches from confiscation and WHEREAS this law violates the rights of those who have inherited the eight-century legacy of property ownership.

THEREFORE, LET IT BE RESOLVED that we emphatically demonstrate that we are united in voicing our strong opposition to the present “Law on Freedom of Religion or Beliefs and Legal Status of Religious Communities” in Montenegro and that we protest the attempt to confiscate our sanctuaries from those who have inherited from their forebears the responsibility of worshipping in them and preserving them, joining the cry of the hierarchy, clergy, monastics and faithful of Montenegro: “We will not give up our Sanctuaries!”.

WHEREAS in the past year, certain administrative and leadership positions among the Diocesan clergy have changed.

THEREFORE, LET IT BE KNOWN that Protopresbyter-stavrophor Rade Merick serves the Diocese in the capacity of Episcopal Deputy, Economos George Veselinovic serves as Dean of the Pittsburgh Deanery, and Protopresbyter-stavrophor Stevan Rocknage serves as Spiritual Advisor of the Federation of the Circles of Serbian Sisters, and LET IT BE KNOWN that Presbyters Vedran Grabic and Stefan Djoric serve as Director and Co-Director of St. Sava Camp in Shadeland, Pennsylvania, which is exponentially growing in numbers from year to year.

WHEREAS the Serbian Orthodox Diocese of Eastern America, after 40 years since its founding, and in accordance with the Holy Canons of the Orthodox Church (Canon 41 of the Holy Apostles and Canon 24 of the Council of Antioch) and also the Constitution of the Serbian Orthodox Church (Articles 5, 8, 13, and 107), has obtained proper registration and, in general, enjoys new visibility in prominent American and International circles.

WHEREAS the faithful of the Diocese of Eastern America express their joy in being hosts for the forthcoming Church Assembly-Sabor of the Serbian Orthodox Church in North, Central and South America, to be held at St. George Serbian Orthodox Church in Clearwater, Florida on Saturday, February 29, 2020 and WHEREAS through the Assembly we have the ability to reaffirm our indivisible unity, which has never been called into question, and to finally cast aside all misconceptions caused by ignorance or malice and WHEREAS we reject the machinations of persons of ill will who have been attacking the hierarchy of our Church and their attempts to destabilize the same and WHEREAS among those with ill will are those whose baseless attacks were personally directed at His Grace Bishop Irinej and WHEREAS we pray for the enlightenment of such individuals, for their restoration to the community of the faithful in Christ, and for their salvation.

THEREFORE, LET IT BE RESOLVED that the Serbian Orthodox Diocese of Eastern America joyfully welcomes the responsibility to host the 2020 Church Assembly-Sabor of the Serbian Orthodox Church in North, Central and South America, reaffirming the indivisible unity of the Serbian Orthodox Church in the Western Hemisphere, dispelling misconceptions regarding the unity of the Church, rejecting ill will towards and attacks on the hierarchy of our Church and attempts to disrupt the stability of the Church and her leaders, confirming our confidence in and support for our Archpastor Bishop Irinej, and praying for the enlightenment, return to the fold of the flock of Christ, and salvation of those who propagate misinformation.

We thank God in His Saints for our Diocese of Eastern America, under the leadership of His Grace Irinej and for our unity and harmony as a community of believers, praying fervently that we always remain bound together in love as a Diocesan Family and that our God, Who loves humankind, will always look favorably upon us, as we move forward, ever progressing, yet always remaining the same, and never stagnating. We thank God for our Fatherland from which we herald, and for the Country in which we live and freely worship.