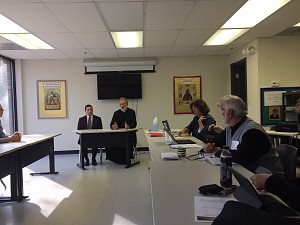 The meeting was held concurrently with the Orthodox Christian Association of Medicine, Psychology and Religion (OCAMPR) and co-sponsored by the Orthodox Christian Counseling Institute (OCCI). His Grace Bishop Irinej of the Eastern American Diocese of the Serbian Orthodox Church presented the joint keynote address on the theme of this year’s OCAMPR Conference: Isolation, Violence, Hope & Communion.

The theme of this year’s OTSA meeting was “Unity in the Church”.  Papers were delivered on such topics as the early Church as a unified reality; the relationship between unity and prayer for enemies; a critical analysis of comparisons drawn between the 1054 schism and the 2018 schism (over Ukrainian autocephaly); liturgical possibilities for healing and reconciliation in Ukraine; the correspondence between political and ecclesial models of unity; synodality and local unity with the parish considered as a “local church” in the lived experience of many North American Orthodox; and iconographic images of Orthodox unity in depictions of church councils.

Protodeacon Dr. Jovan Anicic, Director of Christian Education for the Serbian Orthodox Diocese of Eastern America, delivered a presentation on “Ecumenical Dialogue and the Christological Dogma: The influence of St. Cyril of Alexandria on Western Theological Circles of the 20th Century”.

A panel discussion was held on questions of unity and uniformity among parishes and across local churches where the ministry and lives of women in the Church are concerned.  In addition, a special session on North American Orthodox unity included reflections and conversation with His Grace Bishop Irinej and Mr. Nicholas Anton, Director of the Inter-Orthodox, Ecumenical and Interfaith Relations office of the Greek Orthodox Archdiocese of North America.

This year’s keynote Florovsky Lecture, entitled “Recovering the Fullness of Synodality: Lay Participation in the Conciliar Process,” was delivered by Dr. Paul Gavrilyuk and may be accessed on OTSA’s website at otsamerica.org along with further information about the Society and a full program of this year’s meeting. 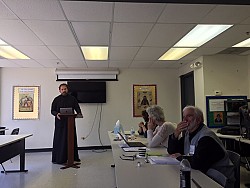