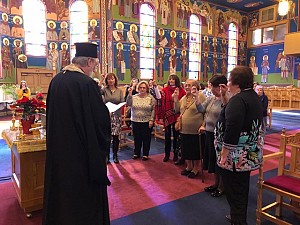 On Saturday, November 23, 2019, the Federation of Circles of Serbian Sisters of the Eastern American Diocese of the Serbian Orthodox Church, held their bi-annual and election meeting at St Sava Cathedral, in Cleveland, Ohio.

The day began with a warm and inviting breakfast which was prepared by the host Kolo, the St Petka Circle of Serbian Sisters from the Cathedral. The Cleveland and Pittsburgh Deaneries were particularly well represented.

President Millie Radovick led the meeting with the guidance of His Grace Bishop Irinej. Greetings were offered by Fr. Dragoslav Kosic, host Parish Priest. Items discussed were Shadeland Children's Camp with its ever-growing number of campers, charitable donations, New Marcha Monastery, IOCC, and other deserving causes. Also discussed were ways by which the Federation could encourage regional participation, from the Washington, DC and St Petersburg Deaneries.

The meeting was closed upon its completion and re-opened with selection of a chairperson for the election of officers.

The newly elected officers preceded to the Cathedral Church for the swearing in by His Grace Bishop Irinej.

The day concluded with a delicious lunch prepared by the host Kolo for all the Sisters and guests. 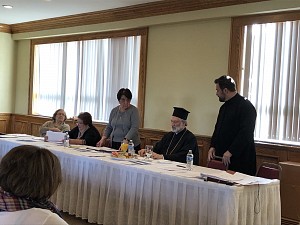