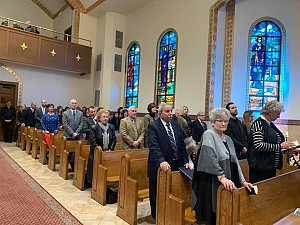 On November 17, 2019, the parish of the Holy Prophet Elijah in Aliquippa gathered to prayerfully celebrate and observe a significant milestone:  the blessing of the new cross and cupola erected on the Holy Resurrection Chapel at the parish’s cemetery.  As an added blessing, the faithful also would see the consecration of the memorial monument erected at the grave of the parish’s long-time spiritual leader, +Very Reverend Stavrofor Stevan Stepanov of blessed memory, who was the driving force for the construction of the Holy Resurrection Chapel in the 1980s.

The events of this crisp, clear, sunny autumn day began in the St. Elijah Church with the arrival of our archpastor, His Grace, Bishop Irinej of the Serbian Orthodox Diocese of Eastern America.  There to greet him at the door of the church were the clergy who would join in serving the day’s Hierarchical Divine Liturgy:  Very Reverend Stavrofor Rade Merick, Episcopal Deputy of the Diocese of Eastern America; Very Reverend Vladislav Golic, pastor of St. Stephen Serbian Orthodox Church of Lackawanna, New York; Reverend Branislav Golic, pastor of the St. Elijah parish; and Very Reverend Protodeacon Milos Zdralic, Secretary of the Diocese of Eastern America.  A full complement of altar servers – ranging from men with decades of experience to small boys just learning the role – assisted the clergy during the Divine Liturgy.  Inspiring liturgical responses were provided by the St. Elijah Serbian Church Choir, directed by Kathy Loverich.

Following Protodeacon Milos’s reading of the Holy Gospel, His Grace offered an edifying sermon on the day’s lesson – the parable of the rich man and Lazarus.  His Grace explained how this parable upends conventional notions of wealth and poverty.  The rich man, said His Grace, was consumed with the material wealth and fine living while on earth, but he ultimately suffered eternal poverty; while Lazarus, a poor and suffering beggar, found true riches in Abraham’s Bosom as a result of his humble earthly life.  His Grace also noted how this parable demonstrates that our names offer a sign for how we are known and serve as a testament for our earthly lives.  Lazarus is ever-remembered as one who found favor with God through his struggle on earth, while the rich man, consumed by his wealth, has no name, and is known to all ages only by his failure and torment.

Continuing the Divine Liturgy, during the Great Entrance His Grace included remembrances of +Prota Stevan and all those who gave of their time, talent, and treasure to support the construction of the cupola and cross on the Holy Resurrection Chapel, as well as all hierarchs and priests who have served our parish.  During the Communion of the Faithful, many small children and their parents came forward to join others in receiving from His Grace the Holy Body and Blood of our Lord.  At the end of Divine Liturgy, after brief remarks from His Grace and Father Branislav, many faithful made the short drive to the parish’s cemetery in neighboring Hopewell Township for the blessing of the chapel cross and cupola and +Prota Stevan’s memorial stone.

The service at the cemetery began in the chapel, with the clergy and faithful singing the Troparion and Kontakion of the Holy and Life-Giving Cross as His Grace blessed the new additions to the chapel with Holy Water.  Immediately after, all of the faithful present walked the short distance to +Prota Stevan’s grave, where His Grace blessed the new memorial stone and offered a small memorial service for our much-loved +Prota Stevan.  The service at the memorial site ended with the entire group of clergy and faithful joining to chant “Vjecnaja Pamjat” (Memory Eternal) in remembrance of +Prota Stevan.

Having completed the Divine Services, the clergy and faithful reassembled at the St. Elijah Center for a celebratory banquet.  Several clergy from parishes of the Pittsburgh and Cleveland Deaneries of the Diocese of Eastern America, as well as clergy from other Orthodox churches around the area, arrived to join in the agape gathering.  Following a delicious meal that was donated and prepared by the parish’s Cupola Committee, Kathy Loverich acted as Mistress of Ceremonies for a brief program that included remarks by Nick Kosanovich, president of the St. Elijah Parish; Stephanie Kovacevic, chairman of the Cupola Committee; and Protinica Ana Stepanov, who offered poignant remarks about her and her husband’s love for the St. Elijah parish and her gratitude for the completion of the chapel project, which +Prota Stevan first dreamed of decades ago.  Father Branislav then came forward to offer his own remarks as well as those of two invited guests who could not be present, Very Reverend Stavrofor Dr. Milos Vesin, a devoted spiritual child of +Prota Stevan, and Very Reverend Stavrofor Dr. Rodney Torbic, a son and member of the St. Elijah parish.  Father Branislav then introduced His Grace, who congratulated the parish on its accomplishment and exhorted it to continue its efforts to grow and thrive, as +Prota Stevan always wished.  The program ended with the entire assembly joining to sing “Dostojno Jest” (It is Truly Meet). 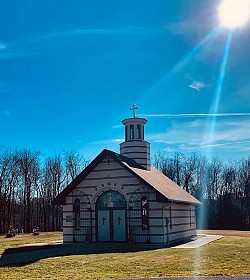