Dn Jovan Anicic at the McGinley-Rice Symposium: The Face of the Person Who is Homeless 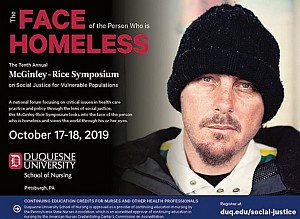 With the blessings of His Grace The Right Reverend Irinej, Bishop of Serbian Eastern America, Deacon Jovan Anicic, the director of the Department of Christian Education, attended at the 10th annual McGinley-Rice Symposium: The Face of the Person Who is Homeless, held at the Duquesne University Power Center in Pittsburgh on October 17-18, 2019.

In his talk he explored the Christian Orthodox perspective about the phenomenon of homelessness and social injustice.

Using the Oscar-nominated short film 4.1 Miles, which emerged in the wake of the catastrophic refugee/immigrant crisis in 2016, he described the agony of human suffering.

The hero of this film is an (extra)ordinary person, Kyriakos Papadopoulos, a Greek navy lieutenant who rescued strangers from the deep waters off the island of Lesbos.

During the presentation Jovan Anicic stressed the efforts of the Orthodox Church to confront destitution and social injustice as an expression of her faith and the service to the Lord, Who identifies Himself with every person and especially with those in need (Mt 25:40).