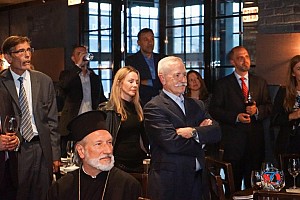 On Monday evening, September 9, 2019 many gathered at the Dawson to celebrate NBA star Vlade Divac’s induction to the Basketball Hall of Fame in Springfield, Mass.

The celebratory gathering to sponsor the Ana and Vlade Divac Foundation, a humanitarian organization, which has invested millions of dollars of philanthropic aid in Serbia, from housing for refugees to rehabilitation of school facilities, economic grants, scholarships, support for youth and children, and the like. That evening $44,000 was collected to refurbish at least 10 classrooms for the Technical School at Vladicin Han.

At the beginning of the evening, a video was screened in which Sacramento Kings general manager Vlade Divac stood in front of a packed house at the Naismith Hall of Fame in Springfield, MA on Friday evening, September 6, 2019 and gave a stirring acceptance speech. NBA legend Jerry West, who took a chance on the 7-footer, which helped open the door for a generation of European players to play in the NBA, sat proudly at his side.

Vlade enters the Hall, as a member of the class of 2019, through the International Committee. From humble beginnings with his national team to stints with the Los Angeles Lakers, Charlotte Hornets and Sacramento Kings, Divac is a basketball pioneer and an ambassador for his sport. “To me the game of basketball has always been about love,” Divac said as he made his opening remarks. “So it’s a good thing that I had my agent and good friend Mark Fleisher by my side to make sure I made some money along the way.”

His dry sense of humor is part of what made him an amazing teammate and allowed him to have an impact on players around the world. His ability to pull a locker room together was legendary, as he states: “Basketball is the opposite of selfishness, basketball is solely about giving and sharing and caring for one another.”

Divac delved briefly into his beginnings in the former Yugoslavia, where he was part of one of the greatest international teams in history. After winning silver at the 1988 Olympics and gold at the 1991 EuroBasket, civil war split the Yugoslavian team in pieces. “Even though politics, war and hate tried to break us apart, they didn’t succeed,” Divac said. “They didn’t know that our love for each other was that much stronger than all the hate they were trying to impose on us.”

More than anything, Divac spoke philosophically about love and bigger issues than the game of basketball: “Basketball is like life and life is like basketball. It’s just a game," Divac said. "So lets play the best we can while we are still here with love, compassion, selflessness fair play and supporting each other to be bigger and better human beings.”

Vlade is the 15th member of the Kings franchise to enter the Hall of Fame and he joins Mitch Richmond as the second player in the Sacramento-era to enter as a King. He is entering his sixth season as an executive with the team and is the driving force behind the roster transformation that led to the franchises best record since the 2005-06 season. 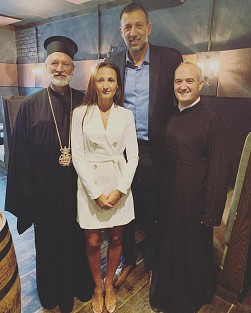