Groundbreaking Ceremony at Nativity of the Theotokos Monastery

On Saturday, September 7th, 2019, His Grace Bishop Irinej of Eastern America, joined His Eminence Metropolitan Savas of Pittsburgh of the Greek Orthodox Archdiocese of America, for the Service of the Blessing of Water and Groundbreaking at the Greek Orthodox Monastery of the Nativity of the Theotokos in Saxonburg, Pennsylvania.

The sisterhood, founded as the first Greek Orthodox women's monastery in the Americas, in 1989 by the Elder Ephraim, is headed by Gerontissa (Abbess) Theophano. Among the many Greek and Serbian clergy present was the Most Venerable Archimandrite Geronda (Abbot) Paisios of the Greek Orthodox Monastery of Saint Anthony outside of Phoenix, Arizona.

An anonymous donation generously enabled the Monastery to clear 10 acres of land in preparation for the erection of a new monastery complex and church.

Many faithful Orthodox Christians, old and young, joined their hierarchs, clergy and the sisterhood, on the eve of their Patronal Feast, for this meaningful service with which the building of a new monastery church, and monastic cells with a chapel, was initiated.

Following an enlightening program in which, among all else, Bishop Irinej recounted his days serving at Belgrade’s eminent urban Monastery, the Entrance of the Theotokos on Senjak, and again thanked the good Greek people for their well known love and assistance to the Serbs in their time of need.

Following the program a well laden outdoor monastic agape meal was served to all those present, and many remained well after to enjoy the philoxenia (hospitality) of the sisterhood. 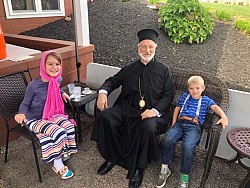