Archbishop Nikitas of Thyateira and Great Britain Enthroned in London 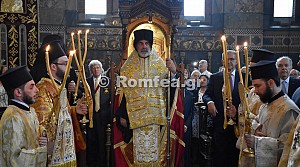 In an atmosphere of majesty and special splendor, the Enthronement of the new Archbishop of Thyateira and Great Britain, His Eminence Nikitas, took place on Saturday, July 27, 2019.

The enthronement ceremony took place in the historic Hagia Sophia Cathedral in London, in the presence of many hierarchs and clergy.

There also attended Leaders, Representatives of Communities, Associations and other Organizations. Their Graces Bishop Dositej of Great Britain and Scandinavia and Bishop Irinej of Eastern America represented the Serbian Orthodox Church.

In the enthronement, His All Holiness Ecumenical Patriarch Bartholomew was represented by His Eminence Metropolitan Emmanuel of France, who also addressed the new Archbishop of Thyateira.

In his speech, Metropolitan Emmanuel said that this day is crucial for the local Church, but also for the personal progress of Archbishop Nikitas, as he undertakes the spiritual responsibility of a faithful congregation, and becomes the successor of many honest men and preachers.

As Metropolitan Emmanuel advised the new Archbishop, “May you become in your life a doctor and healer of souls. Through these two elements your work shall be pleasing to God”.

From his part, in his speech, the new Archbishop of Thyateira thanked Ecumenical Patriarch Bartholomew, who sent him to undertake the leadership of the Church of Great Britain and Ireland, assuring that he shall always remain loyal to the Mother Church.

“I come to Great Britain in a time that the world is shaken by many inequalities and sufferings. For this reason, my priority is to cooperate all together, people and clergy, so as to hold the pilot light of Orthodoxy burning in Great Britain, and renew this light with a genuine and undistorted oil, i.e. the oil of Orthodox Faith”, stressed, inter alia, Archbishop Nikitas.

During his speech, the new Archbishop also addressed the Deputy Foreign Minister responsible for Greeks Abroad, Mr. Antonis H. Diamataris, as follows: “We may be expatriates, but our heart beats in Greek pulse, Greek blood runs in our veins”.

Finally, the Archbishop addressed the Representative of the Republic of Cyprus stressing the following: “Mr. Evriviadis, we shall always stand by your side, in the struggle of the suffering Cyprus to find a sustainable solution to the Cyprus problem”.

Archbishop of Thyateira: “It is a blessing to have Mount Athos by my side”

The official dinner provided for the enthronement of the new Archbishop of Thyateira and Great Britain, Nikitas, was attended by a large crowd of over 800 guests and official, and honored with their presence the new Archbishop.

During the dinner, Archbishop Nikitas wished the Ecumenical Patriarch good health, hoping that the Lord shall bless him with a long and prosperous life at the throne of Orthodoxy.

He also stressed the special presence of the Most Venerable Abbots of Mount Athos, Petros of Saint Dionysios Monastery, Alexios of Xenophon Monastery and Gabriel of Pantokratoros Monastery, stressing that it is a great blessing for him to have Mount Athos by his side.

In conclusion, he thanked all the attendants for their presence, and wished everyone longevity and happiness, with the blessing of God.

Glorious concelebration of Liturgy at St. Sophia’s Cathedral in London

His Eminence Archbishop Nikitas officiated his first Hierarchical Divine Liturgy as Archbishop of Thyateira and Great Britain at St. Sophia’s Cathedral in London, the following day, on Sunday, 28 July 2019.

Concelebrating also were the Abbots of Xenophontos and Pantokratoros Monasteries of Mount Athos, Alexios and Gabriel.

It is also worth noting that a crowd of faithful filled the Church to honor the new Archbishop with their presence. 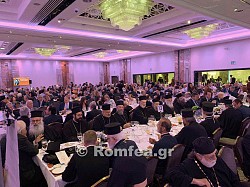