Jubilee: Celebrating 800 Years of the Autocephaly of the Serbian Church (2nd Day) 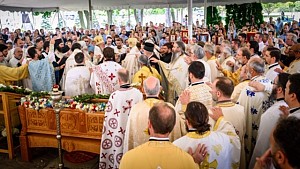 The 22nd Quinquennial Church Assembly of the Serbian Orthodox Dioceses in the United States of America.

On the feast day of the holy and unmercenary physicians Cosmas and Damian, on the second day of the Church Assembly-Sabor, a most majestic Holy Hierarchical Liturgy was served in honor of these Saints, in honor of our St. Mardarije of Libertyville and all America and in prayerful commemoration of the 800th anniversary of the autocephaly of the Serbian Orthodox Church, to the glory of the Triune God.

His Grace Bishop Maxim of Western America officiated with the concelebration of Their Graces Bishop Longin of New Gracanica-Midwest America, Bishop Peter of Cleveland (ROCOR), Bishop Irinej of Eastern America and Bishop Sava retired Bishop of Slavonia along with clergy, monastics and deacons from dioceses throughout the United States of America. In attendance were His Eminence Archbishop Demetrios, retired Archbishop of the Greek Orthodox Archdiocese and His Eminence Metropolitan Kallistos. Following Vespers and dinner Metropolitan Kallistos of Diokleia.

Beneath a large tent set before the St. Sava Monastery Church in Libertyville clergy and the faithful gathered in large numbers around the relics of St. Mardarije of Libertyville and all America. An amazing sight and setting which brought inspiration and joy to the hearts of all those in attandance, as they pondered not only on the grand jubilee of our Serbian Church, but our own history on this continent, in the presence of the holy relics of its first bishop and missionary. As the Slava Kolach was offered and broken in honor of St. Mardarije and to Bishop Irinej's exclamation: “Christ is in our midst,“ a most thundering “He is and shall be!“ was returned.

The Standing Committee for Liturgical Music was given the blessings of the bishops to arrange all the liturgical music throughout the 22nd Annual Church Assembly. Milan Damljanovic led a wide-ranging choir that beautifully sang the responses to the liturgy.

His Eminence Metropolitan Kallistos delivered an inspiring homily at the conclusion of the Divine Liturgy in which he spoke of the importance of Holy Communion and the joy he experienced at today's liturgy, just as he has experienced at many liturgies in recent times where more and more faithful are approaching the Holy Chalice. His Eminence prefaced his homily by noting that in his many years as an Orthodox he continues to learn more and more about Orthodoxy. Thus, it was during this visit to the Serbian people and Serbian Church in America that he learned of the life of St. Mardarije which has certainly inspired him to, upon his return to Great Brittain, say in his prayers, St. Mardarije pray to God for us!

A festive and solemn program followed on the beautiful picnic grounds at the very spot where many decades before a gathering of Serbs took place with the blessing of St. Bishop Mardarije. With love and archpastoral care St. Mardarije brought his people together and invited them to build the holy monastery to the glory of God for future generations of Serbian people.

A rich program in commemoration of the 800th Anniversary of the Autocephaly of the Serbian Orthodox Church was held under the pavilion, emceed by Dragan Arsic and Mihaila Tuba. His Grace Bishop Longin opened the program with the following remarks:

Today our Serbian Orthodox Church on this continent celebrates a joyous event – the 800th anniversary of its autocephaly. Our father by blood and spirit, St. Sava, gave the Serbian Orthodox People an invaluable gift at the exact moment that our Church and Land was ripe for self-rule. Autocephaly is the complete independance of a Local Orthodox Church.

Understanding this purpose while at the same time being spiritually mature to take on such an endeavor, our St. Sava requested from the Patriarchate of Constantinople the blessing to have an autocephalous church for his people. That was granted to us in 1219. As much as it was an honor, it was a responsiblity to uphold the teachings of the Christian Faith and continue missionary work to our people, which continues to this day and will continue until the end of time

We give glory and thanks to our merciful God in Trinity, Father, Son and Holy Spirit who enriches us and renews this gift to us at all times.

Fifty years ago, there was a similar celebration to this one for the 750th Anniversary. This took place at St. Sava Cathedral in Milwaukee.This can be read about in the commemorative book for this event. And that celebration, as joyous as it was for the event, was also saddened by the lack of unity that was at that time on this continent. During our division, our hearts became cold to spirituality and sanctity. Our main concern was revenge and legal victories. Now, thanks to God, the sadness that existed at that time is gone. Since that celebration, the greatest accomplishment of our Serbian Orthodox Church is the unity that was achieved 27 years ago, when our Serbian Orthodox Church in the Diaspora was united by our great father, His Holiness Patriarch Pavle of Blessed Memory. Through reunification, our hearts were softened and opened to the grace of God. Fruits of sanctity then have come forth. Only through it were we able to have revealed to us the Saints that served in this country – St. Nikolaj Velimirovic, St. Varnava Nastic, St. John Maksimovic, St. Sebastian Dabovic, and our St. Mardarije Uskokovic. God indeed revealed to us miracle upon miracle, the fruits of peace, love and communion. As we celebrate autocephaly today, let us remember that this doesn't mean we are isolated from other Orthodox Churches, but that we celebrate together in unity as one Holy Orthodox Christian Church.

So, let us rejoice dear brothers and sisters, for today the greatest fruits of our unity and our autocephaly in this country are before us in the incorrupt relics of St. Mardarije. Let us bow down before him with gratitude for what he establisehed for us on this continent, as he was an imitator of St. Sava – sharing in the ways of the one equal to the Apostles and succesor to his throne. Let us glorify the Saints on this continent who have confirmed and upheld the faith in us, far away from the homeland, and let us with humility, repentance and thanksgiving live our life in preparation for eternal life, the goal of each of these great people and every Christian.

Your Eminence, Metropolitan Kallistos, we welcome you and thank you for your presence with us during these events. Your contribution to the Orthodox Faith over many decades has been inspiring to all Orthodoxy and Christendom. Many members of our Diocese today are Orthodox Christians thanks to your writings and teachings. We thank God that you were able to join us and bless us with your inspiring words.

In his talk during the program Metropolitan Kallistos once more touched upon the Holy Eucharist as the central liturgical service of the Orthodox Church.

As people were walking in they were greeted with sounds of Serbian national and spiritual melodies played by the Radakovic family. V. Rev. Stavrophor Vojislav Bilbija also performed a number of songs during the program, Podajte Braco and Mi cekamo Hrista, while the young and talented artist Bojana Pekovic played the traditional Serbian instrument, the gusla, performing Srmt majke Jugovica. During the program Emmy award winning actor Jonathan Jackson performed an original song that he wrote and composed dedicated to Kosovo and the suffering Serbian Orthodox people. Afterward the amateur acting group Oko Sokolova from Chicago performed a scene from Srpska Ramonda. They performed two scenes from the dramatic play Srpska Ramonda in commemoration of the suffering of the Serbian people during World War I, the Serbian retreat through Albania, referred to as the Serbian Golgotha or the Blue graveyard. At the conclusion of the program actress Katarina Radojevic recited A Prayer for the Salvation of the Serbian People by Saint Bishop Nikolaj.

The faithful people enjoyed the rest of the afternoon in fellowship before heading to Holy Resurrection Serbian Orthodox Cathedral in Chicago where Metropolitan Kallistos delivered an evening talk entitled, The Inner Meaning of the Divine Liturgy. His Eminence pointed out that the faithful, together with the clergy, serve the Divine in unity. This is expressed particularly when all the faithful in attendance at the Divine Liturgy sing the responses, partake of Holy Communion which should be more frequent, but with proper preparation – through the sacramental life in the Church. This way the Divine Liturgy manifests perfect love. When the priest turns to the people asking for forgiveness they forgive and ask him for forgivness, and in this way the Holy Spirit is given and multiplied. On the contrary, without forgiveness He is diminished, i.e. not given. Moreover, we should bear in mind that when we say at the liturgy, “Let us depart in peace“ the liturgy after the Divine Liturgy begins, and our service to those who need help and comfort from the Physician of our souls and bodies begins. 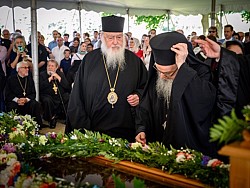